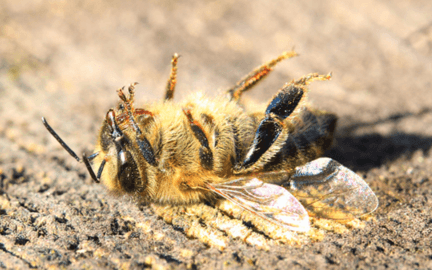 “The death of all these bees is a sign that we’re being poisoned.”

Source: Half A Billion Bees Drop Dead In Brazil Amid Jump In Pesticide Use  | Zero Hedge

Bee apocalypse has unfolded in four of Brazil’s southern states in 1Q19. More than half a billion bees died earlier this year, in a short period, experts are suggesting that pesticides are likely to be blamed, reported Bloomberg.

Around half a billion bees dropped dead in 4 of Brazil’s southern states in the first few months of this year. Samples showed most of the dead had been poisoned with Fipronil, a insecticide proscribed in the EU, classified as a possible human carcinogen by the U.S. EPA (thread)

Most of the dead bees had traces of Fipronil, an insecticide classified by the European Union and the US Environmental Protection Agency as a human carcinogen.

Since President Jair Bolsonaro took control in January, the Ministry of Agriculture has approved sales of a record 290 pesticides, up 27% YoY for the same period. There’s also a bill sitting in Congress that would dramatically decrease pesticide standards.

Brazilian companies such as Cropchem and Ouro Fino, as well as major international firms including Syngenta, Monsanto, BASF and Sumitomo,  have recently won new pesticide registrations.

Why have more than 500,000,000 bees dropped dead in Brazil so far this year? pic.twitter.com/CKWMt4JABI

Bloomberg noted that Anvisa’s test didn’t even include glyphosate, one of Brazil’s best-selling pesticide, which is outlawed in at least a dozen countries around the world.

“The death of all these bees is a sign that we’re being poisoned,” said Carlos Alberto Bastos, president of the Apiculturist Association of Brazil’s Federal District.

At least 18% of Brazil’s economy is agriculture. And it makes sense why President Bolsonaro is relaxing pesticide rules; he’s trying to spark an economic boom by deregulating chemical standards for farmers.

“This is your government,” Bolsonaro told legislators from the agriculture caucus, and his administration has even allowed farmers this year to use whatever pesticides they want.

Greenpeace said 40% of Brazil’s pesticides are “highly or extreme highly toxic,” and 32% of them aren’t allowed in the European Union.

Marina Lacorte, a coordinator at Greenpeace Brazil, told Bloomberg that new approvals for pesticides are being rushed through without proper examination from experts.

“There isn’t another explanation for it, other than politics,” she said.

Making farmers great again was a campaign commitment for Bolsonaro. He even told farmers that he was going to ease pesticide restrictions.

Andreza Martinez, manager for regulation at Sindiveg, a group representing pesticide producers, told Bloomberg about half of the new approvals are ingredients, not final products. This is due to insects developing resistance to legacy formulas.

“It brings more tools to farmers, but that doesn’t mean an increase in the use of products in the field,” she said.

The increased, and sometimes untested chemicals, however, alarms toxicologists. “The higher the number of products, the lower our chances of safety, because you can’t control them all,” said Silvia Cazenave, a professor of toxicology at the Catholic Pontifical University of Campinas.

It’s not just the bees who are being poisoned — it’s also humans, the health ministry said. More than 15,000 cases of agricultural pesticide were seen in 2018, a likely underreported figure.

President Trump has also been approving new pesticides that are dangerous to bees.

A new report showed US beekeepers lost 40% of their colonies in the past year, raising fresh concerns that pesticides are poisoning farmlands.

Making farmers great again not just in Brazil but also in the US could be an uphill battle, as the unintended consequences of deregulating pesticides have led to a global bee apocalypse.