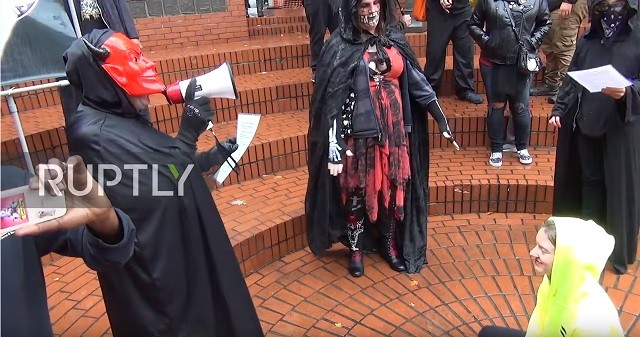 Earlier this month, an antifa faction called the "Satanic Portland Antifascists" staged a mock religious ritual in downtown. One of the people leading the ritual is @destroyed4com4t, a local transsexual activist and writer who I remember cheering as I was beaten in June. pic.twitter.com/qWTh4Q2vu1

The video was clipped from this Ruptly compilation of a Patriot Prayer march earlier this month:

Right-wing activist group Patriot Prayer held a march through Portland, Oregon, on Sunday, where scuffles erupted as they intercepted by a group called the Satanic Portland Antifascists.

Patriot Prayer leader Joey Gibson explained that his group, which has been known to engage in street brawls with Antifa, is this time “going to practice non-violent resistance, because if we defend ourselves they will just arrest us anyways, so we’re going to come down here non-stop, and we are going to bring Jesus into Portland.”

The Satanic Portland Antifascists later were seen holding a ritual of their own, where they repeatedly chanted “hail Satan.”

Remember, according to CNN host Chris Cuomo antifa are identical to the American soldiers who stormed the beaches of Normandy on D-Day.