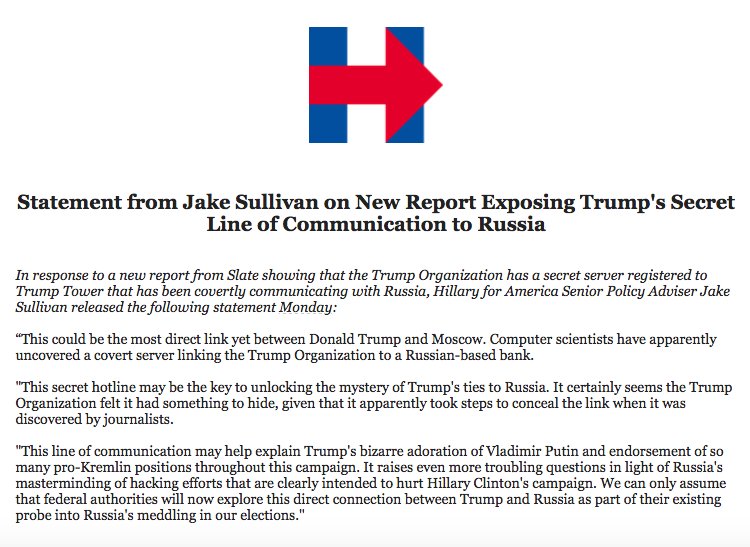 Quote:
n late July, one of these scientists—who asked to be referred to as Tea Leaves, a pseudonym that would protect his relationship with the networks and banks that employ him to sift their data—found what looked like malware emanating from Russia. The destination domain had Trump in its name, which of course attracted Tea Leaves’ attention. But his discovery of the data was pure happenstance—a surprising needle in a large haystack of DNS lookups on his screen. “I have an outlier here that connects to Russia in a strange way,” he wrote in his notes. He couldn’t quite figure it out at first. But what he saw was a bank in Moscow that kept irregularly pinging a server registered to the Trump Organization on Fifth Avenue.

More data was needed, so he began carefully keeping logs of the Trump server’s DNS activity. As he collected the logs, he would circulate them in periodic batches to colleagues in the cybersecurity world. Six of them began scrutinizing them for clues.

(I communicated extensively with Tea Leaves and two of his closest collaborators, who also spoke with me on the condition of anonymity, since they work for firms trusted by corporations and law enforcement to analyze sensitive data. They persuasively demonstrated some of their analytical methods to me—and showed me two white papers, which they had circulated so that colleagues could check their analysis. I also spoke with academics who vouched for Tea Leaves’ integrity and his unusual access to information. “This is someone I know well and is very well-known in the networking community,” said Camp. “When they say something about DNS, you believe them. This person has technical authority and access to data.”)

ABC News investigative journalist Brian Ross released a news piece that could end any type of credibility Donald Trump may have left. In this newest report, Ross found Trump’s Russian connections to have a bigger role in his life than he’s lead on. This could be a direct conflict of interest for Trump if he should become elected president in November.

In previous interviews, Trump has continuously denied any serious ties with Russian oligarchs. Those statements have already been proven false several times over, seeing how Trump has been very cozy with Vladimir Putin the past few years. Hillary Clinton has released attack ads trying to expose Trump’s Russian ties in the past. Now Brian Ross talks with people who have had actual connections with Trump, proving his denial is a joke.

From Russia With Trump: A Political Conflict Zone – ABC News – http://abcn.ws/2cYunlh via @ABC