Corneal Key Logger can extract PIN of any smartphone using the owner’s selfie! 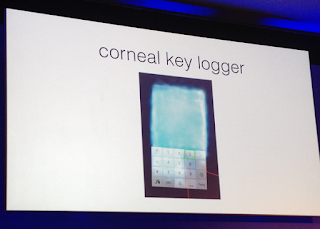 If you thought biometrics was the ultimate weapon of authentication, you may be proved wrong by Starbug. German researcher Jan Krissler, aka Starbug is a hacker whose claim to fame is breaching Apple’s TouchID and recreating the German defense minister’s thumbprint from a high-res image.

Starbug has revealed that he can now decode anyone’s smartphone PIN code from any selfie “image”. of the owner.

Starbug and his colleagues have extracted the reflection of smartphone screens in the eye whites of “selfie” subjects, then they used an ultra-high resolution image techniques to extract the user’s PIN code. Starbug presented his discovery at the Biometrics 2015