But officials repeatedly emphasized that there is no risk of transmission between humans.

The case was confirmed in a lab test last night. It’s the first such case in North America. 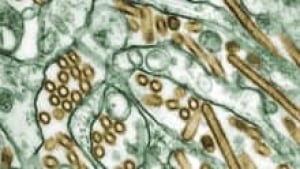 The person first showed symptoms of the flu on a Dec. 27 flight from Beijing to Vancouver aboard Air Canada flight 030. The passenger continued on to Edmonton on Air Canada flight 244, after spending a few hours in the Vancouver airport, and was admitted to hospital Jan. 1. The symptoms of fever, malaise and headache worsened and the patient died two days later. The Public Health Agency of Canada was notified Jan. 5.

The diagnosis at the time of death was an inflammation of the brain and the linings that cover the brain. “That is one of the ways that H5N1 patients die,” Talbot said.

It is not known how the patient contracted the disease. The patient did not leave Beijing, did not travel to farms and did not visit any markets.

“Virtually every case has a pretty strong link to a close contact with birds,” Talbot said, though he noted there are other settings in which a person might catch H5N1, such as a restaurant that kept live birds for slaughter.