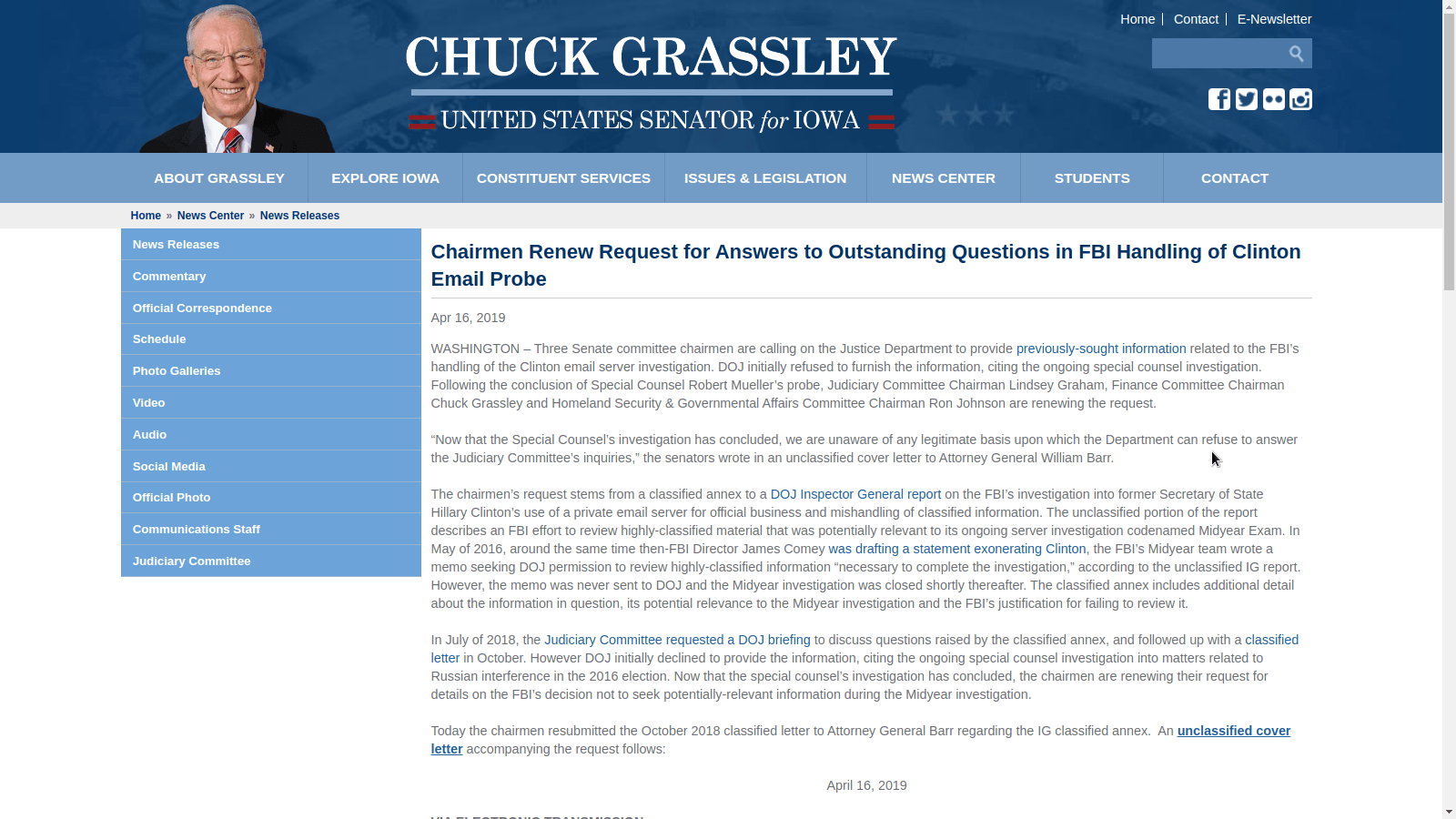 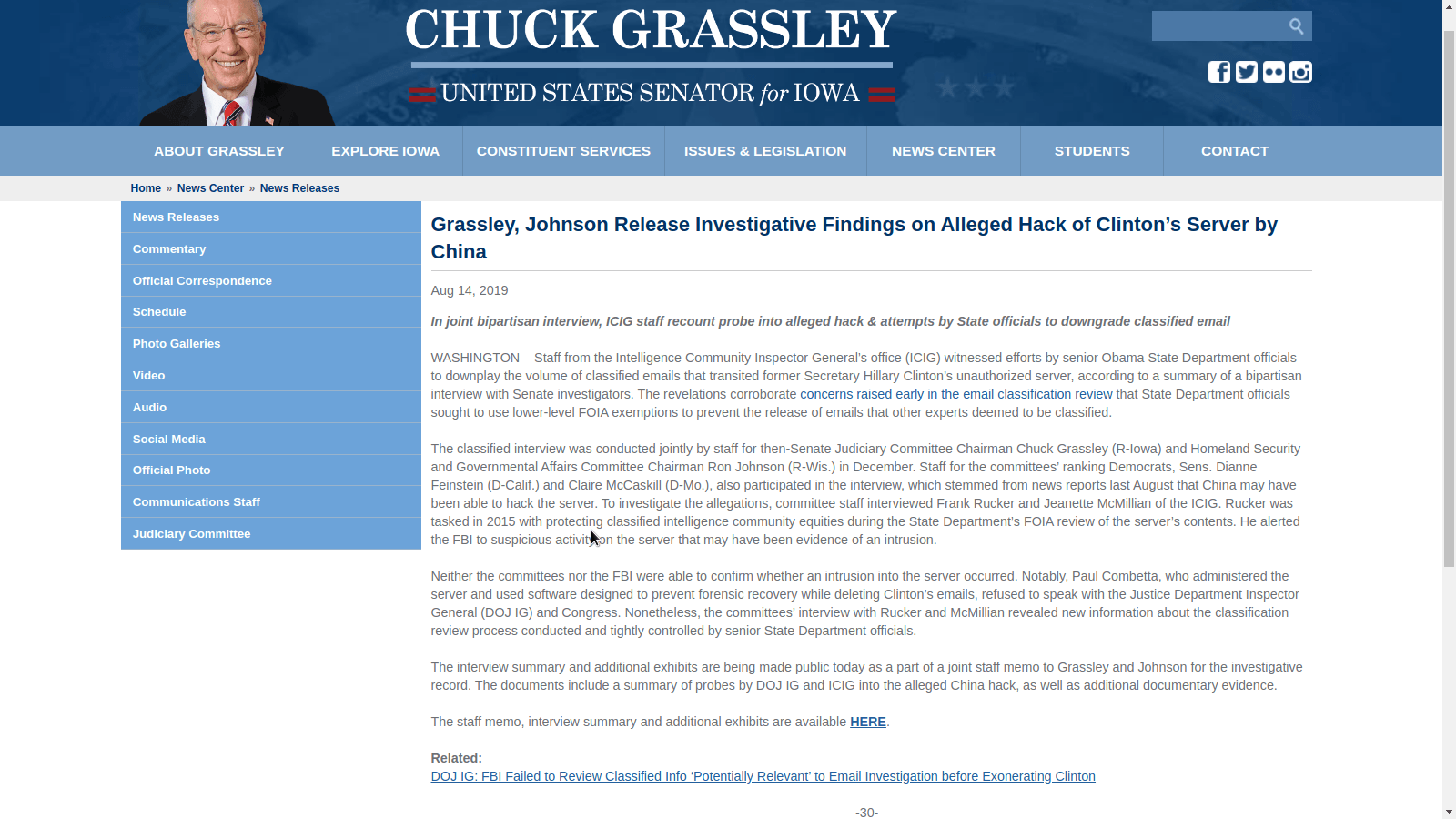 WASHINGTON – Staff from the Intelligence Community Inspector General’s office (ICIG) witnessed efforts by senior Obama State Department officials to downplay the volume of classified emails that transited former Secretary Hillary Clinton’s unauthorized server, according to a summary of a bipartisan interview with Senate investigators. The revelations corroborate concerns raised early in the email classification review that State Department officials sought to use lower-level FOIA exemptions to prevent the release of emails that other experts deemed to be classified.

The classified interview was conducted jointly by staff for then-Senate Judiciary Committee Chairman Chuck Grassley (R-Iowa) and Homeland Security and Governmental Affairs Committee Chairman Ron Johnson (R-Wis.) in December. Staff for the committees’ ranking Democrats, Sens. Dianne Feinstein (D-Calif.) and Claire McCaskill (D-Mo.), also participated in the interview, which stemmed from news reports last August that China may have been able to hack the server. To investigate the allegations, committee staff interviewed Frank Rucker and Jeanette McMillian of the ICIG. Rucker was tasked in 2015 with protecting classified intelligence community equities during the State Department’s FOIA review of the server’s contents. He alerted the FBI to suspicious activity on the server that may have been evidence of an intrusion.

Neither the committees nor the FBI were able to confirm whether an intrusion into the server occurred. Notably, Paul Combetta, who administered the server and used software designed to prevent forensic recovery while deleting Clinton’s emails, refused to speak with the Justice Department Inspector General (DOJ IG) and Congress. Nonetheless, the committees’ interview with Rucker and McMillian revealed new information about the classification review process conducted and tightly controlled by senior State Department officials.

The interview summary and additional exhibits are being made public today as a part of a joint staff memo to Grassley and Johnson for the investigative record. The documents include a summary of probes by DOJ IG and ICIG into the alleged China hack, as well as additional documentary evidence.

Ms. McMillian said that it was found by Mr. Rucker in the batch of 30,000 emails. She said that what

ICIG received is basically a copy of the email. She said there was concern over the carterheayindustries@Gmail.com email address that was observed in the metadata. It appeared that this email address was essentially a live “drop box” for all of Secretary Clinton’s sent and received emails.

When you were implanted in the State Department’s FOIA review, did you come across any evidence that State Department officials were intentionally downgrading classified emails?

Rucker:
Mr. Rucker said that he talked to State officials about some employees who were doing this·. He said that he was told that Austin Evers and Cattierine Duval were two attorneys who took steps to downgrade classified emails from Bl to BS.

Majority:
Do you believe Ambassador Patrick Kennedy was trying to do the same?

Rucker:
Mr. Rucker said yes and that Mr. McCullough was present during some of these meetings, so he has knowledge as well. Mr, Rucker safd that at one such meeting, Ambassador Kennedy provided packets of information that were ready to go out to the intelligence community. He said that Ambassador Kennedy threw documents from the packet at him across table during one of the meetings and yelled, “Why does this need to be classified?” He said that Ambassador Kennedy fought against classifying emails but that he was not as aggressive in his actions as compared with the steps taken by Mr. Evers and Ms. Duva

Nearly every email sent and received via the Clinton email server was forwarded to a Gmail account that appeared to be tied to a business known as Carter Heavy Industries. An investigator for the intelligence community inspector general (ICIG) found that the business has ties to Chinese trucking company Shandong Carter Heavy Industry Co. Ltd, raising concerns that a foreign actor may have gained access to Clinton’s emails, according to the documents.