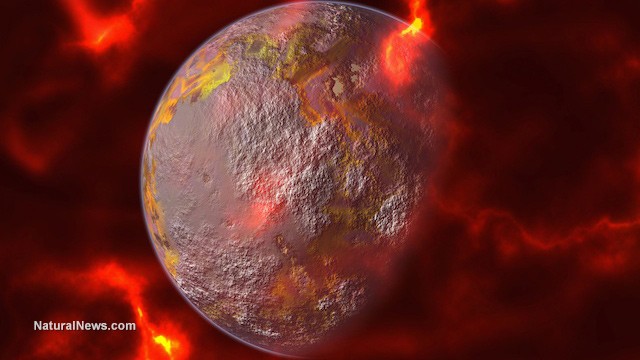 (NaturalNews) When drug companies are caught faking clinical trial data, no one is surprised anymore. When vaccine manufacturers spike their human trial samples with animal antibodies to make sure their vaccines appear to work, we all just figure that’s how they do business: lying, cheating, deceiving and violating the law.

Now, in what might be the largest scientific fraud ever uncovered, NASA and the NOAA have been caught red-handed altering historical temperature data to produce a “climate change narrative” that defies reality. This finding, originally documented on the Real Science website, is detailed here.

We now know that historical temperature data for the continental United States were deliberately altered by NASA and NOAA scientists in a politically-motivated attempt to rewrite history and claim global warming is causing U.S. temperatures to trend upward. The data actually show that we are in a cooling trend, not a warming trend (see charts below).

This story is starting to break worldwide right now across the media, with The Telegraphnow reporting (1), “NOAA’s US Historical Climatology Network (USHCN) has been ‘adjusting’ its record by replacing real temperatures with data ‘fabricated’ by computer models.”

Because the actual historical temperature record doesn’t fit the frenzied, doomsday narrative of global warming being fronted today on the political stage, the data were simply altered using “computer models” and then published as fact.

Here’s the proof of the climate change fraud

Here’s the chart of U.S. temperatures published by NASA in 1999. It shows the highest temperatures actually occurred in the 1930’s, followed by a cooling trend ramping downward to the year 2000: 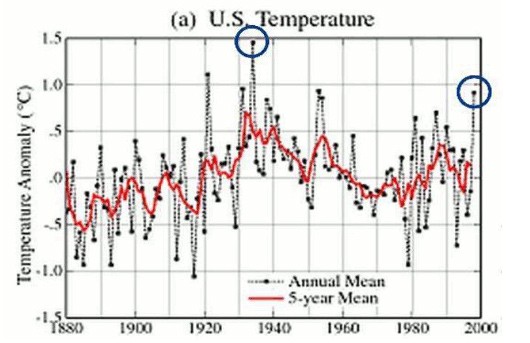 The authenticity of this chart is not in question. It is published by James Hansen on NASA’s website. (2) On that page, Hansen even wrote, “Empirical evidence does not lend much support to the notion that climate is headed precipitately toward more extreme heat and drought.”

After the Obama administration took office, however, and started pushing the global warming narrative for political purposes, NASA was directed to alter its historical data in order to reverse the cooling trend and show a warming trend instead. This was accomplished using climate-modeling computers that simply fabricated the data the researchers wished to see instead of what was actually happening in the real world.

Using the exact same data found in the chart shown above (with a few years of additional data after 2000), NASA managed to misleadingly distort the chart to depict the appearance of global warming: 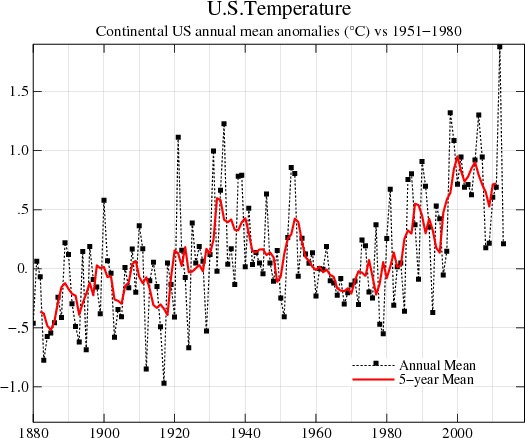 The authenticity of this chart is also not in question. It can be found right now on NASA’s servers. (4)

This is a clear case of scientific fraud being carried out on a grand scale in order to deceive the entire world about global warming.

What’s even more interesting is that even the EPA’s “Heat Wave Index” data further support the notion that the U.S. was far hotter in the 1930’s than it is today. 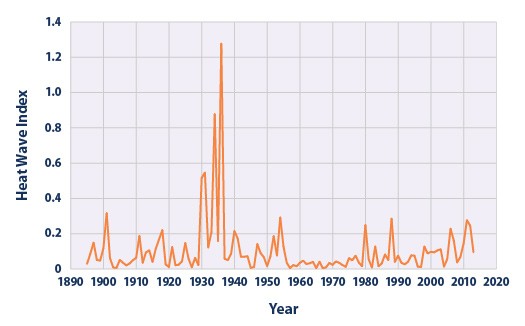 Seeing these charts, you might wonder how the extremely high temperatures of the 1930’s came about. Were we releasing too much CO2 by burning fossil fuels?

Nope. That entire episode of massive warming and drought was caused by conventional agricultural practices that clear-cut forests, poisoned the soils with chemicals and plowed the top soil away. Lacking trees to retain moisture, areas that were once thriving plains, grasslands and forests turned to desert. Suddenly, the cooling effects of moisture transpiration from healthy plant ecosystems was lost, causing extreme temperatures and deadly drought.

Shortsighted agricultural practices, in other words, really did cause “warming,” while a restoration of a more natural ecosystem reversed the trend and cooled the region.

Reforestation is the answer

This brings us to the simple, obvious solution to all this. If you want to cool the planet, focus on reforestation efforts. If you want to retain moisture and keep your soils alive, you need diverse plant-based ecosystems, not clear-cut fields running monoculture operations.

Forests act like sponges that soak up rainwater, and then they turn around and slowly release that water back into the air, “moisturizing” the atmosphere and keeping humidity levels high enough to support other nearby grasses, shrubs and plants. When you clear-cut forests — as has been done all across the world to make room for mechanized agriculture — you effectively raise temperatures by eliminating nature’s plant-based water retention and cooling systems.

Industrialized farming, in other words, has already been historically shown to radically increase continental temperatures and “warm” the region. So why isn’t the White House warning the world about the dangers of industrialized agriculture?

The answer: Because it doesn’t accomplish anything that’s politically important to this administration. It’s far more important to use the false panic of global warming to shut down clean coal power plants (U.S. coal plants are FAR cleaner than China’s) and drive the population into a state of subservient obedience through doomsday scare tactics.

Now we conclusively know the government is lying about global warming

As an environmentalist, I’m always concerned about pollutants and emissions, especially heavy metals being dumped into the atmosphere. But I’ve also learned over the years that almost everything the federal government aggressively promotes to the public is a blatant lie. Rarely does anything resembling the truth ever come out of Washington D.C.

These people are experts at lying with bad science, hiding their deceptions behind the cover of “scientific thinking” and making outlandish claims such as saying that anyone who doesn’t believe their fabricated data must also believe the Earth is flat. Remember, the people who are telling you that burning fossils fuels is causing runaway global warming are the very same people who also claim mercury in vaccines is safe to inject in unlimited quantities, toxins in GMOs are safe to eat, chemotherapy works great for cancer patients and that there’s no such thing as any food or nutrient that prevents disease.

These are the same government people who build massive networks of underground bunkers and caves in complete secrecy while publicly claiming preppers are conspiracy theorists. It’s the same government that lied about running inhumane medical experiments on prisoners via the National Institutes of Health, then got caught and had to apologize decades later.

If you think this same government is telling you the truth about global warming, you probably need to have your head examined. But not by a government-licensed psychiatrist, or she’ll dose your head full of psychiatric medications that cause you to lose so much of your cognitive function, you’ll actually start to believe CNN’s broadcasts.

Sources for this article include:
(1) http://www.telegraph.co.uk/earth/environment…