Skip to content
Uncategorized
August 1, 2014 Q
Former head of German Jewry warns that behind the façade of humanitarian concern for civilians in Gaza, Germany has become more dangerous for Jews than at any time since 1945.
By: Lori Lowenthal Marcus
Published: July 31st, 2014 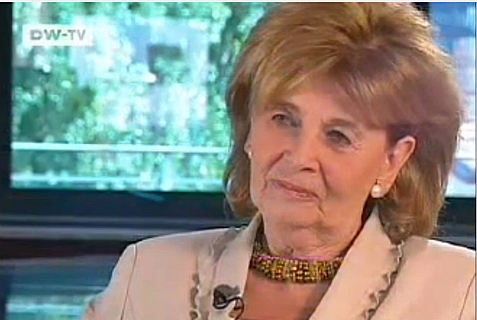 In a startling report from German media, we learn that the former president of the Central Council of Jews in Germany, Charlotte Knobloch, told Jews living in Germany to avoid being recognizable as a Jew in public in order to avoid being attacked.

Knobloch went further. She said that German Jews are increasingly threatened, and that the level of danger is the worst it has been since 1945. The excuse this time is dressed up as humanitarian concern for civilians in Gaza. But there always is some flimsy excuse which evanesces under the slightest ray of inspection.

Just one example of current German hostility to Jews was an effort by three men to set fire to a synagogue in Wuppertal-Barman overnight on July 28. The culprits used molotov cocktails (as if further reminders of World War II were necessary) in an attempt to raze the synagogue.

But Knobloch wasn’t suggesting that it was an acceptable solution for Jews to cower like mice and hope no one notices their Jewishness. She said that it was not acceptable for Jews in Germany to again be the victims of attacks and insults.

“When synagogues burn, it is time for all leaders to ask: ‘What must we do to protect Jewish citizens!’”

Knobloch also decried the intolerable Jew-baiting, incitement against Jews and calls for violence. She pointed out the particular irony of such behavior constituting an abuse of the freedoms of expression and assembly, and dressed-up as a humanitarian response to the deaths in Gaza.

This 81-year old German Jewish woman did not only criticize those who are inciting against Jews, she also demanded to know where were the other German citizens who are not responding to the anti-Semitic outrages, instead remaining silent. Again.

“The general public is silent,” Knobloch said. “Whoever is silent now affirms what is happening!”

About the Author: Lori Lowenthal Marcus is the US correspondent for The Jewish Press. She is a recovered lawyer who previously practiced First Amendment law and taught in Philadelphia-area graduate and law schools.