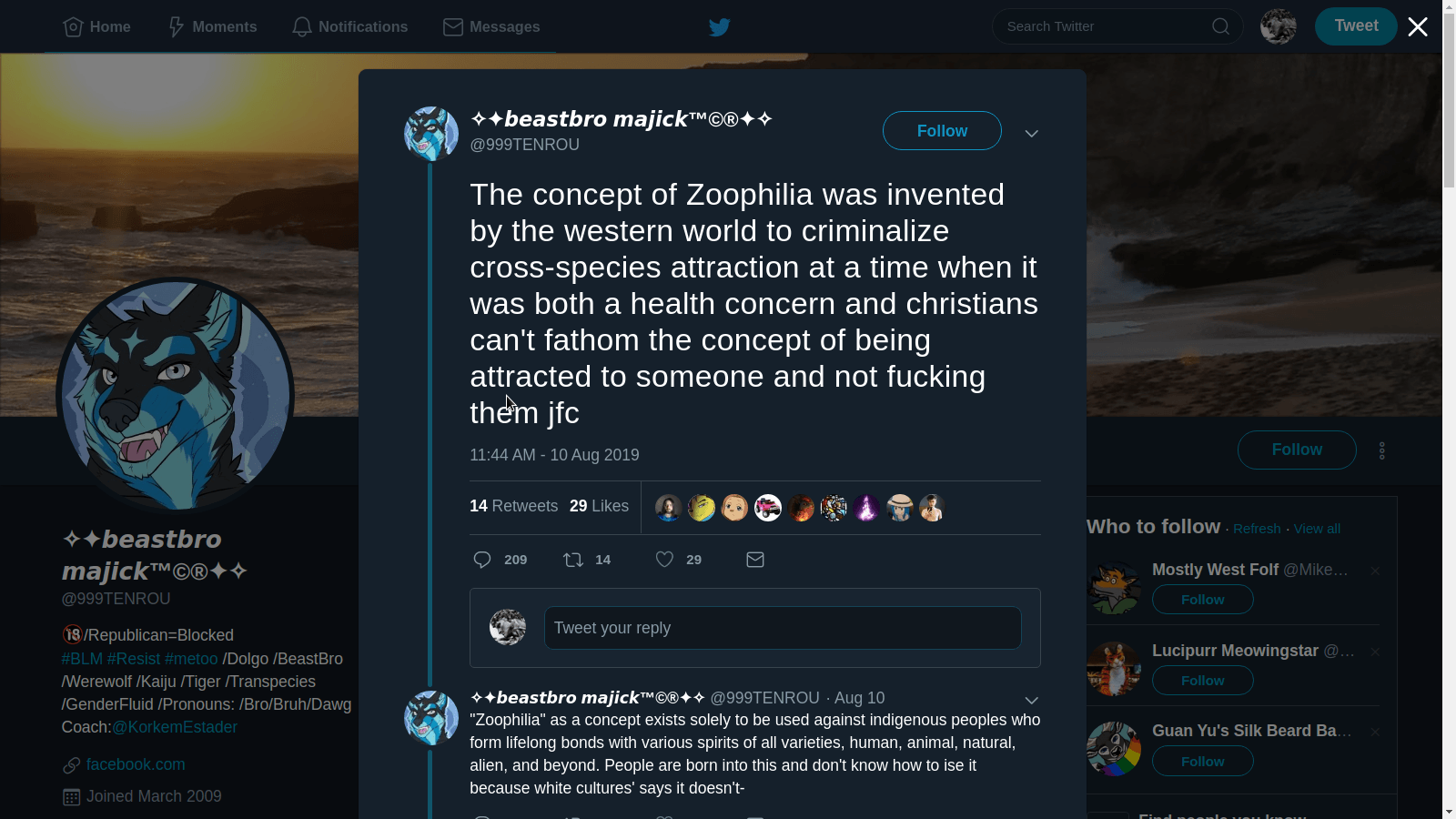 Gay Trans Communist who is openly sexually attracted to animals teaches us that being against sexual relations with animals is a concept rooted in White Supremacy and is used to colonize Native Americans while they were out fornicating with horses.

And this is OK with the Gay Trans Communist “progressives” They think that this is just another walk in the park, as long as it bashes anything and any one derived or descending from the Caucasian AKA “White Man”

The following “cook” that to the new think, and group speak practiced by the progressive left this to be not only permitted, but accepted, to be applauded and learned from…

They want you to take this tripe as fact, as a bona fide history lesson, the actual truth of history. This guy is claiming that sex with animals was common practice for indigenous peoples and aversion to that is a form of colonial oppression.

As wrong, twisted, and dark of a diatribe “BeastBro” makes he has no fear that the progressives and the “woke” will call him out, or dispatch a psychiatric mental health team with a police escort to check up on him.

Your Moral Compass and Natural disgust is just “cultural imperialism” 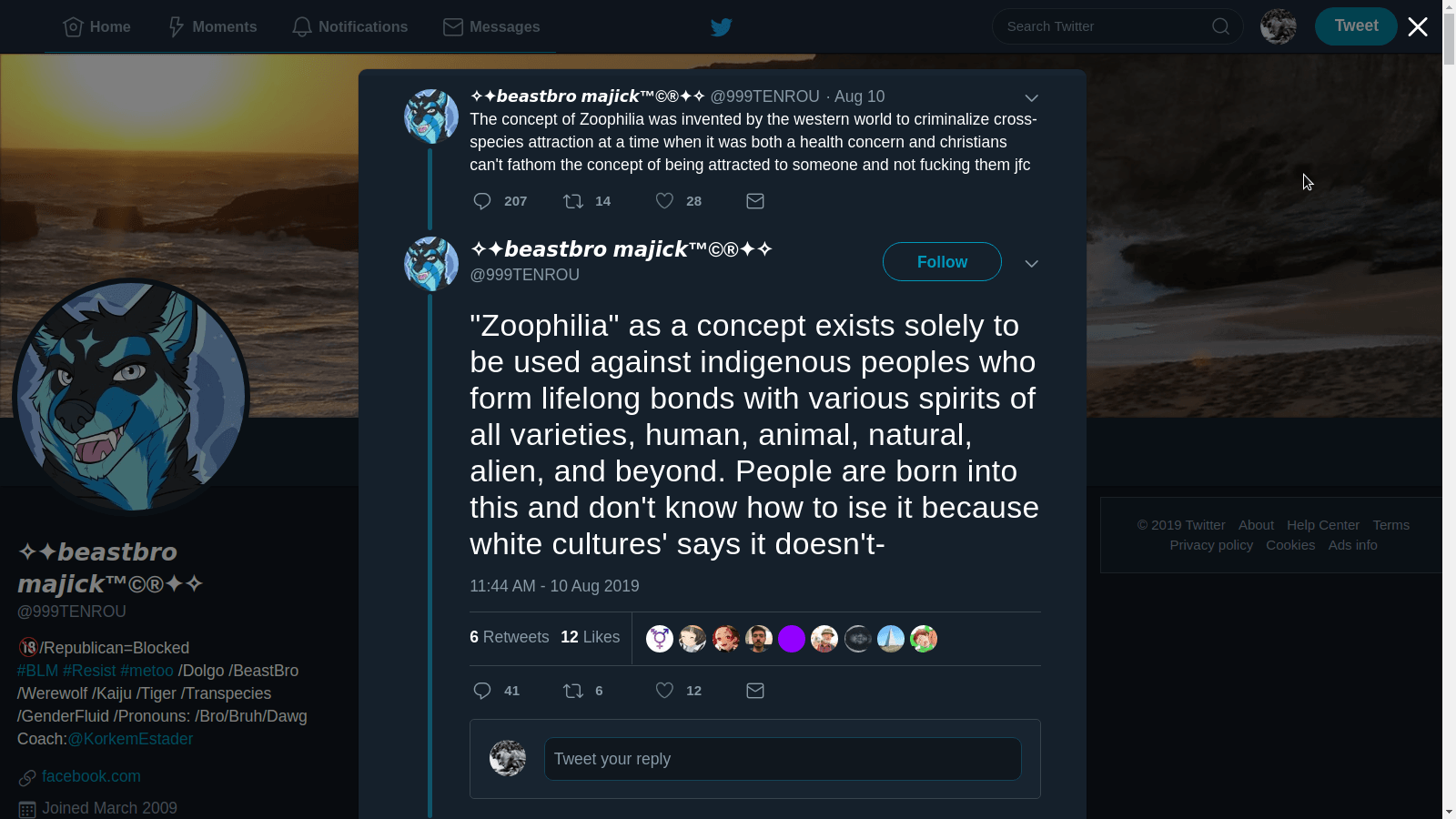 Here is some of the dribble “taught” to us in this lesson.

“”Zoophilia” as a concept exists solely to be used against indigenous peoples who form lifelong bonds with various spirits of all varieties, human, animal, natural, alien, and beyond. People are born into this and don’t know how to ise it because white cultures’ says it doesn’t- exist, so it gets swept under the rug as a mental health problem and people who act on it get jailed and can’t get jobs anywhere because white supremacists on both sides decided it was the best way to determine if someone was native or not.”

“Then coloniser companies like Disney come along and capitalize on our suffering and our spiritual Identities and don’t give anything back but then get to make films like Zootopia without furry community involvement, essentially trying to co-opt an entire spiritual identity”

One person who replies with this tweet is either trolling or serious, at this point who knows? – They write: “The weird sex sh*t I’m into because of trauma I endured actually only disgusts everyone because of colonialism and mainstream religion. Get on my level of wokeness.” I think they are tweeting this ironically, at least I like to think so, sadly it is right on the money IMHO as to parsing such a concept into such a short phrase.

This person is a hurt soul or Trauma survivor of some sort, and is being public about who and what they are using all the tricks of the progressives lefts propaganda to be accepted while attempting to intimidate and virtue signal / shame those who think anything otherwise and reject their teachings in History and Culture.

As wrong, twisted and dark of a diatribe “????????” makes he has no fear that the progressives and the “woke” will call him out or dispatch a psychiatric mental health team with a police escort to check up on him.

As you can read on the Twitter thread indigenous and non indigenous commentators took objection to this tweet and this mans actions and ideology. His response is to call them “Transphobe’s”.

Yup that is all it takes for them to shew you off and prove you are an Alt right racist, colonial oppressor and cultural imperialist.

Here is the original tweet… Viewer discretion is advised

Although now set to private. it was. and is allow to stay active! One can only imagine the mess behind the digital wall at twitter.