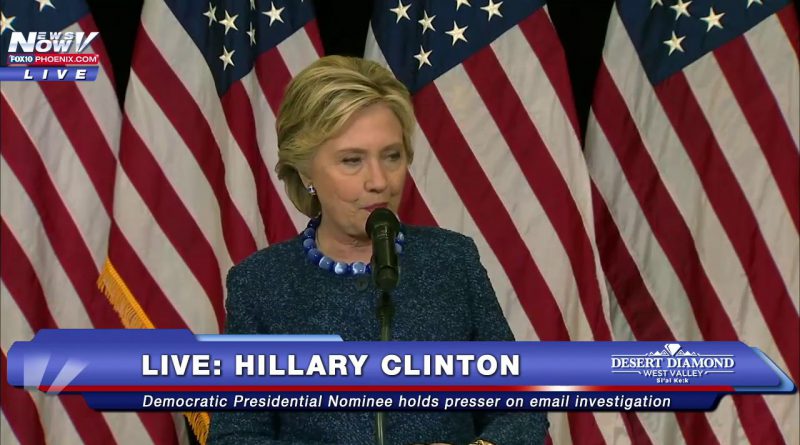 Oh Hillary even your Slogan on the podium with you is crooked. “You know, we’ve heard these rumors. We don’t know what to believe and I’m sure there will be even more rumors that’s why it’s incumbent upon the FBI to tell us what they’re talking about because, right now, your guess is as good as mine and I don’t think that’s good enough,” Clinton said at a brief press conference in Des Moines, Iowa.”

“It is now time to choose  a president”

See she wants to and has to keep framing that her run is a legit one, a defacto coup d’état as it where but you are not supposed to look at that. Forget about the emails she says, I think in a more just time one would say quite easily translated forget about the substance of those emails., they are of no consequence and now turn your focus on the election.  Not bad advice if you are a voter this election.

You know I think people a long time ago  made up their minds about the emails, I think that is factored in to uh what people think and ah now they are choosing a President.  So I would urge to get out and vote early in all the states that ah have early voting because I think Americans want a president who can lead our country, who can get the economy working for every one, not just those at the top, and who can bring our country  together. I offer that, I can do that ahh and I am very confident that the American people know that and ahh  we are going to continue discuss whats at stake in this election., because I believe ahhh that it is one of the most consequential elections ever!  Hillary Rodham Clinton October 29th 2016

So what is America to think of this? Shut up about the emails and get out and vote.

Emails, Huma, Anthon Weiner “did you speak to them” she is asked. Calls news “rumors” and starts telling the FBI what should be done and how they are derelict in their duties.

Seems to me if she could run the oval office and critique the FBI while still only running for office she would have known that a Home Brew basement email server open to China, Russia, etc., and any state actor/s or non state actor/s for years was not serving the American people, but OBAMA’s administration apparently had no control and oversight on her.

Typical Hillary bravado;  She dares the FBI to do their job.  They have to close in on her now that they reopened. Who is going to want to work with her  or in / under her administration if you are active FBI on this? I doubt they have rookies running it so there are some pretty serious careers at stake and this is perhaps the only way for Comey to redeem himself in the court of public opinion.

Why NSA and or DHS have not just taken it over is a mystery but not a surprising one.  They have all of Wiener’s Wiener pics and every last thing on any and every account on any and every device for the past decade on the man and his wife Huma….

To bad Hillary did not send Huma packing home with hammer to smash his devices. The stupid it burns!  Snowden cast the illusions of privacy aside with his “ill gotten” cache of truth.  This esp. is true with this crew. If you log on with you device at a McDonalds once in your devices life using their free WiFi they can track you for life all over the web, so imagine you have a device like Humas that was parked for days at a time in the White House. Give me a break. How could they not have known or intervened? Why was that not expedient? It makes one think people conspired to deliberately not care for security, from the Whitehouse all the way down.

Huma Abedin, the top aide to Hillary Clinton and the wife of perv sleazebag Anthony Wiener, was a major security risk as a collector of info

I don’t know this for a fact but I think Comey and Lynch are frightened for more than their political lives.  That is just a thought, one I am not alone in.  Lynch… I wonder if Bill was on the horn with her today…. I would not doubt it.  I feel certain both of them have serious concern over this and it is well founded IMHO.

The FBI needs to come clean, tell her and the American People what they have on her… Is she truly blind sided?  I think so. Even if this is more “Bread and Circuses”.

Hillary I think she should be scared. She sounds very un pleased to say the least, she did not like the fact house republicans got the scoop on the new evidence. Again I truly think she is blind sided by this move. If she is elected I see some early “retirements” in the FBI.

It makes sense to hammer away at the election; This election is what you should be focusing on. What else can she say? If she does not become president she is well hooped.

Even is she does “win” Voting machine conflicts of interest aside she could well be led to the …. well you get the idea. If it does happen there will be many that will not blink an eye and you can just here the voices saying the USA just could not handle a woman president, or some such rot.

She thinks people have weighed her in the balance, many are finding her in want. They have “factored it in”. This election she says it’s outcome is what matters, sadly I am not sure America your elections and voting system is a just weight and measure of the true will of the people. I will hand it to her she tells one truth if your are going to vote, get out early.

On a closing note they have worked some pretty good industrial light and magic on her outward appearance.  Seems like her people took a lesson in what not to do care of John Kerry when using fillers and light “fixes”. Out side of her eyes she looked dare I say it, healthy.