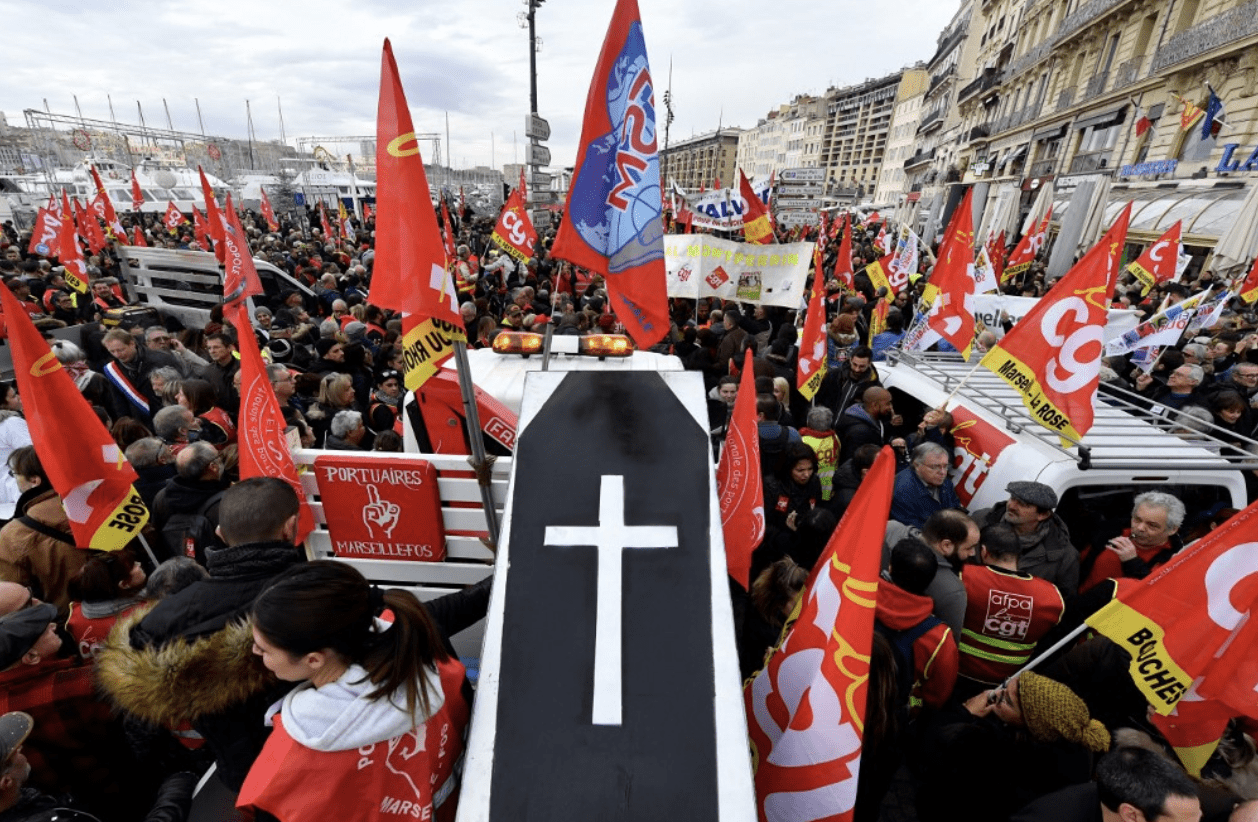 Millions of workers are staying home.

In what appears to be the biggest disruption to French society since the gilets jaunes demonstrators nearly torched Paris last year, public workers across the country stayed home on Thursday, immobilizing public transit across the country as the first general strike in more than 20 years began.

The walkout was called by unions angry at President Emmanuel Macron’s pension reforms (not unlike how a planned – then scrapped – gas tax hike sparked the giles jaunes).

On the fist day of the strike, parts of Paris resembled a ghost town during what are typically busy morning-commute hours. Roads were empty, and train stations were deserted, according to the Times of London.

The biggest industrial action of Macron’s tenure is, so far, staggering in scale: 50% of French teachers are off work, nine out of ten trains were cancelled and eleven of the fourteen underground lines in Paris are closed. A total of 245 separate demonstrations have been announced across France as students, firefighters, healthcare workers and others joining in. Strikes at Air France forced a wave of flight cancellations, leaving thousands of travelers scrambling for a workaround. Air France cancelled 30% of its domestic flights and 10% of international short- and medium-haul flights on Thursday, RT reports.

Millions of workers are staying home.

In Paris, some resorted to bikes, skateboards or walking in the bitter cold as 90% of the trains in the country were closed.

Workers in Paris take to bikes, scooters and even skateboards to get to the office this mornin. And many more walking on a bitterly cold day. Big police presence at Gare Du Nord for protest later on Thursday. #grevedu5decembre pic.twitter.com/KsikwvchAv

Some joked that the strike had made Paris into a much more ‘eco-friendly’ city. Which is a great way of looking at the situation for thousands of progressives who have also joined in the climate action strikes.

The strike is expected to continue until Monday as the unions and Macron duke it out over the controversial pension reforms. Paris police are deploying 6,000 riot police to do battle with demonstrators who have decided to take their yellow vests out of the closet and back into action.

Huge police presence at Gare de l'Est in Paris where unions are congregating ahead of the march to Place de la Nation this afternoon. They fear a violent minority of extremists will try to hijack the demo. #grevedu5decembre pic.twitter.com/iIF4nchQ7O

Many of France’s most iconic tourist spots in Paris were forced to shut their doors because of the strikes. The Eiffel Tower and the Orsay museum remained closed on Thursday due to staff shortages, while the Louvre, the Pompidou Center and other museums were mostly closed as well (though some said certain exhibits would still be open).

Many noted that outside the typically packed Gare du Nord train station, there was an eerie silence, with taxi cabs lined up with their green lights on, struggling to find customers in the deserted streets.

The abundance of first-time cyclists created some confusion during the morning commute.

Haven't seen so many cyclists in Paris since…. well the last Metro strike back in September. Two Parisian cyclists just crash into one another in front of me. "Sorry Im not used to this," says the elderly man. "Me neither," said the young woman. "We are all in the same mess'' pic.twitter.com/dSR2cJmNHC

Of more immediate concern for Macron, dozens of gilet jaunes protesters are blocking fuel depots in the south and near the city of Orleans, leaving more than 200 petrol stations without fuel on Thursday, while another 400 are rapidly nearing the last of their inventory. These blockades could bring the country to its knees (since society still needs oil and refined petroleum products to function, despite what the Green New Deal supporters want), and might be the deciding factor that forces Macron to scrap his planned austerity ‘reforms’.

In addition to public transit, protesters blocked major thoroughfares in some parts of the country.

Protesters have now been demonstrating against the austerity measures imposed by Macron’s “Liberal” government for more than a year. Even as the EU threatens to reprimand Macron for overspending, his own people are threatening to oust him at the halfway point of his first term, making him the latest in a string of prime ministers who, after being elected with a popular mandate, swiftly lost favor with the people of France.

Why are they striking? Because Macron wants to end special pension plans made available to public-sector workers. His supporters say that France can no longer afford the 42 special schemes that enable railway employees, for instance, to retire from the age of 55 and which cost taxpayers about €8 billion a year.

Obviously, any drastic cutback in benefits, no matter how necessary from a fiscal perspective, will always be anathema to union bosses, who will look like idiots to their members if they let it pass.

RT has a live stream in central Paris where police have gathered to prepare for a clash with protesters, though most police unions were on board with the strikes.