Former Nigerian scam artist Prince Hakeem has taken on a new profession and is offering to cure ‘gay marriage’ if enough people give him their bank account numbers so he may transfer $1,000 to your account to do the final experiments in America where he can get his patent.

I09 broke news of the miraculous scientific development. 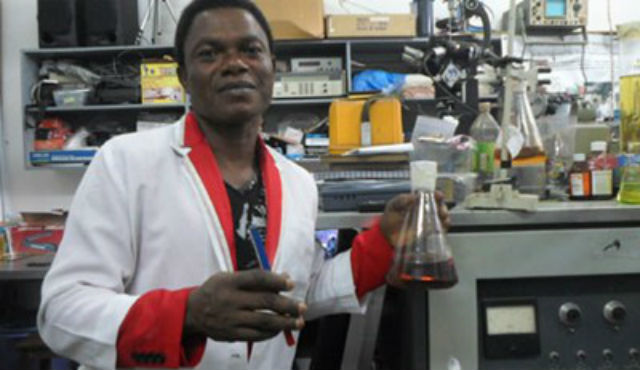 His mathematics of gay marriage is particularly illuminating. In an interview with This Day Live he says:

In mathematics which is another core area of science, I used what is called the principle of commutativity and idepotency. Commutativity in mathematics is simply the arrangement of numbers or arrangement of letters in which the way you arrange them don’t matter. For example, if you say A + B in mathematics you are going to have B + A. For example, if I say two plus three it will give five. If I start from three, I say three plus two it also give you five showing that two plus three and three plus two are commutative because they gave the same results. That shows that A + B will give you B + A, you see that there is a change. In A + B, A started the journey while in B + A, B started the journey. If we use A as a man and use B as a woman we are going to have B + A that is woman and man showing that there is a reaction. A + B reacted, they interchanged and gave us B + A showing that commutativity obeys that a man should not marry a man and a woman should not marry a woman. If you use idempotency, it’s a reaction in mathematics where A + A = A. Actually in abstract algebra, A + A =2A but we are less concerned with the numerical value two. We are more less concerned with the symbols A, you find out that A + A will give you A showing that the whole thing goes unchanged. It didn’t change unlike commutativity A + B give B + A there is a change. A started the journey in commutativity and A + B gave us B + A and B started the journey after the equality sign. But in the case of idempotency A + A will give you A showing that it goes unreacted. You started with A and you meet A ,the final result is A. Showing that a man meeting a man A + A will produce a man there is no reaction, it goes unreacted and in chemical engineering you have to send the material back to the reactor for the action to be carried out again showing that it goes unreacted. That is how mathematics has shown that gay marriage is wrong because commutativity proves that gay marriage is wrong. Idempotency also proves that gay marriage is wrong. So these are the principles I have used to prove gay marriage wrong in physics, chemistry, biology, mathematics and by the grace of God I am the only one that has proved this in the whole world.