ANKARA — Turkey has been quietly helping in the U.S. war against Islamic State of Iraq and the Levant but unlike other NATO partners is trying maintain its neutrality.

Officials said President Recep Erdogan has approved a U.S. request to allow fighter-jets to use Turkish air space for operations in northern Iraq. 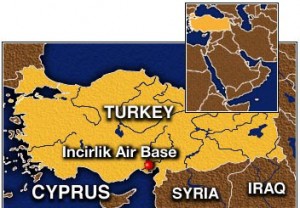 They said the Erdogan’s decision required that the U.S. Air Force request permission every time it sought to land or take-off from Turkish territory, including the NATO base in Incirlik.

On Aug. 21, a U.S. Air Force F-15 fighter-jet that fired missiles at ISIL positions in northern Iraq requested to make an emergency landing in Turkey.

The F-15, struck by ISIL fire, was said to have been damaged. Officials said the U.S. warplane was given permission to land at the Turkish Air Force base in Batman near the Iraqi border. From there, the F-15 was taken to Incirlik for repairs.

“In each case, the F-15 was escorted by our combat jets to ensure that it did not return to the area of operations,” the official, referring to Iraq, said.

Turkey has been the sole NATO member to stay out of the U.S.-led coalition against ISIL. Ankara has cited ISIL’s holding of 49 Turks, including consul-general Ozturk Yilmaz, captured in the takeover of northern Iraq in June 2014.

“NATO has use of Incirlik, but we have complete control over the use of aircraft in Turkish air space,” an official said.

So far, Turkey has acknowledged the use of Incirlik for the U.S.-led war against ISIL.

Officials said Defense Secretary Chuck Hagel sought to expand Turkey’s logistical role in the war against ISIL. During his visit on Sept. 8, Hagel, supported by at least one telephone call from Secretary of State John Kerry, met Erdogan as well as military commanders.

“Incirlik has and can continue to be used for humanitarian operations, not for military operations,” the official said.