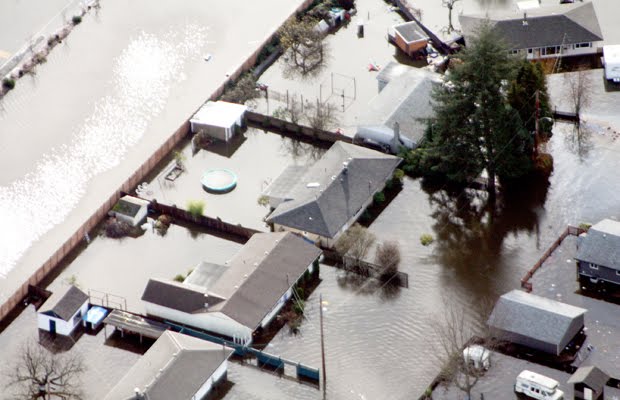 “We have declared a state of emergency due to high tide and high rain fall and flooding in low lying areas,” Mayor Larry Jangula told The Weather Network via telephone Tuesday afternoon. “How long it remains in effect will depend on the weather, but we anticipate it will be in place for a day or so. We’re monitoring the conditions as we go, and the high tide level has passed and rainfall is decreasing, so hopefully things are getting better.”

Several roads have been closed in the city as well as the Lewis recreation centre and the LINC youth centre.

Vancouver places 30,000 sandbags along waterfront in anticipation of king tide

VANCOUVER – Some 30,000 sandbags line a stretch of low-lying waterfront land in Vancouver, placed by city workers in a bid to protect local homes from an anticipated king tide.

The task was completed by about 45 workers in advance of Wednesday’s forecasted weather event, which could coincide with the same type of high winds and heavy rains that have already cut power to thousands of residents across the south coast and flooded streets.

In the Vancouver Island city of Courtenay, for example, municipal leaders declared a state of emergency because of flooding that has closed roads, facilities and parks. The city has asked about two dozen residents to leave a mobile-home park.

Considering the time of year, though, the powerful weather like king tides is not completely unanticipated.

The B.C. Ministry of Environment website reports they occur about twice a year, are typically more dramatic in the winter, and occur when the sun and moon’s gravitational forces reinforce each other, and the moon is closest to the earth. 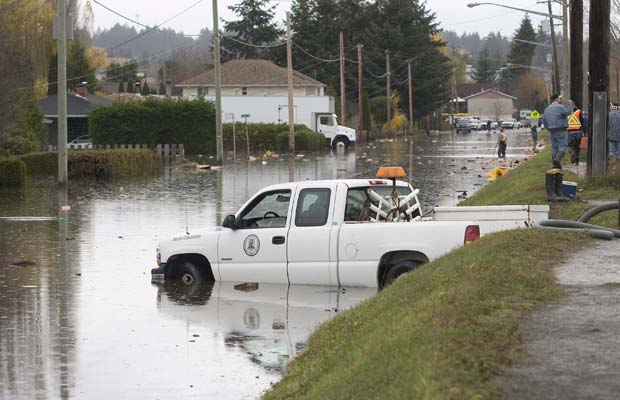 Brian Crowe, a spokesman for the city’s engineering department, said king tides can approach five metres in elevation, or about one metre higher than a typical high tide, and can form storm surges when they are combined with low-pressure systems.

He said Wednesday’s king tide is forecast for 5.5 metres, which is the same elevation of water that flooded Locarno Beach Park on the city’s waterfront in 2012, but not nearby homes.

“We have sandbagged about 200 metres in the lowest area along Marine Drive adjacent to the park to ensure the water can’t get past the edge of the park into the neighbourhood,” he said.

“This is a proactive move. We don’t actually believe the water will be high enough tomorrow to cross the street, but we have high tides happening periodically through the Christmas season until early in January.”

Local resident Fabio Levy said he’s glad to see the work because homeowners can’t get insurance for flooding. Still, he said he would prefer to see a more permanent solution to the threat.

He said he saw water flood the nearby park in 2012.