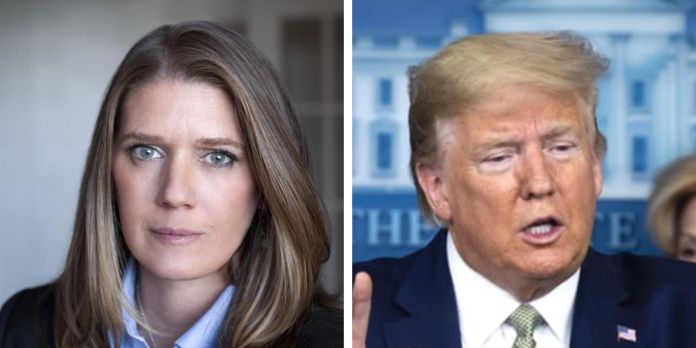 **** ‘More Than Narcissism’****
Ms Trump, 55, writes that for her uncle, “nothing is ever enough” and that the US president exhibits all the characteristics of a narcissist.

“This is far beyond garden-variety narcissism,” his niece, who has a doctoral degree in clinical psychology, writes of Mr Trump. “Donald is not simply weak, his ego is a fragile thing that must be bolstered every moment because he knows deep down that he is nothing of what he claims to be.”

She says the president was influenced by watching his father, Fred Trump Sr, bully her father Fred Trump Jr – who died from an alcohol related illness when she was 16 years old.

Ms Trump writes that Trump Sr was extremely harsh to his oldest son, whom he wanted to take over the family real estate business. But as Ms Trump’s father drifted away from the business, Trump Sr had no choice but to turn to his second son, Donald.

It was not a happy choice, Ms Trump appears to claim. “When things turned south in the late 1980s, Fred could no longer separate himself from his son’s brutal ineptitude; the father had no choice but to stay invested,” she writes of the senior Trump’s attitude towards the future 45th US President.

“His monster had been set free.”

The White House rejected the claim that Mr Trump’s father had been abrasive and harsh, saying that the president “describes the relationship he had with his father as warm and said his father was very good to him”.

****’I Had To Take Donald Down’****
In the book, Ms Trump describes how she supplied tax documents to the New York Times, which used them to publish a 14,000 word investigative article into Mr Trump’s “dubious tax schemes during the 1990s, including instances of outright fraud, that greatly increased the fortune he received from his parents”.

Ms Trump said she was approached by journalists at her home in 2017 and was initially reluctant to help.

She waited for a month, watching as “Donald shredded norms, endangered alliances, and trod upon the vulnerable,” before deciding to contact the Times reporter.

After smuggling 19 boxes of legal documents out of the law firm where they were kept, she handed them over to reporters. She describes hugging them and calls the moment “the happiest I’d felt in months”.

“It wasn’t enough for me to volunteer at an organisation helping Syrian refugees,” she writes. “I had to take Donald down.”

****University ‘Cheater’****
Ms Trump claims that her uncle paid a friend to take the SAT test for him – a standardised exam which determines university placement – because he was “worried that his grade point average, which put him far from the top of his class, would scuttle his efforts to get accepted”.

He hired “a smart kid with a reputation for being a good test taker, to take his SATs for him,” she writes, adding: “Donald, who never lacked for funds, paid his buddy well.”

Mr Trump attended Fordham University in New York City, but later transferred to the Wharton School of business at the University of Pennsylvania.

The White House denied that the president cheated on the university entrance exam.

****Donald ‘Destroyed’ Her Father****
Ms Trump blames the Trump family patriarch, Fred Trump Sr for much of the family’s alleged dysfunction. She says Trump Sr, a New York City real estate mogul, “destroyed” Donald Trump by interfering in his “ability to develop and experience the entire spectrum of human emotion”.

“By limiting Donald’s access to his own feelings and rendering many of them unacceptable, Fred perverted his son’s perception of the world and damaged his ability to live in it,” she writes.

“Softness was unthinkable,” for Trump Sr, she writes, adding that he would grow furious whenever her father – known as Freddy – apologised for any errors.

Fred Sr, she said “would mock him. Fred wanted his oldest son to be a ‘killer.'”

Donald Trump, who is seven years younger than his late brother, “had plenty of time to learn from watching Fred humiliate” his eldest son, Ms Trump writes.

“The lesson he learned, at its simplest, was that it was wrong to be like Freddy: Fred didn’t respect his oldest son, so neither would Donald.”

****A Problem With Women****
Ms Trump writes that her uncle had asked her to ghost write a book about him, called the Art of the Comeback, and provided “an aggrieved compendium of women he had expected to date but who, having refused him, were suddenly the worst, ugliest and fattest slobs he’d ever met”.

He later had someone else fire her and never paid her for her work, she alleges.

She says Mr Trump made suggestive comments about her body when she was 29 years old, even though she is his niece and Mr Trump was married to his second wife, Marla Maples.

She says Mr Trump told his current wife Melania that his niece had dropped out of university and took drugs around the time he hired her for the book project. It is true that Ms Trump had left college, but she says she never took any drugs, and that she believes her uncle made up the story to present himself as her “saviour”.

“The story was for his benefit as much as anybody else’s,” she writes, “and by the time the doorbell rang, he probably already believed his version of events.”

He struggled with alcoholism for much of his life and his premature death was caused by a heart attack linked to his drinking.

President Trump has cited his brother’s personal problems as spurring his administration’s push for tackling the opioid addiction epidemic.

In an interview last year with the Washington Post, Mr Trump said he regretted pressuring his older brother to join the family real estate business.

Mary Trump has largely avoided the limelight since her uncle became president, though she has been critical of him in the past.

After Mr Trump won the election in 2016, she described the experience as the “worst night of my life,” according to the Washington Post.

“We should be judged harshly,” she tweeted. “I grieve for our country.”