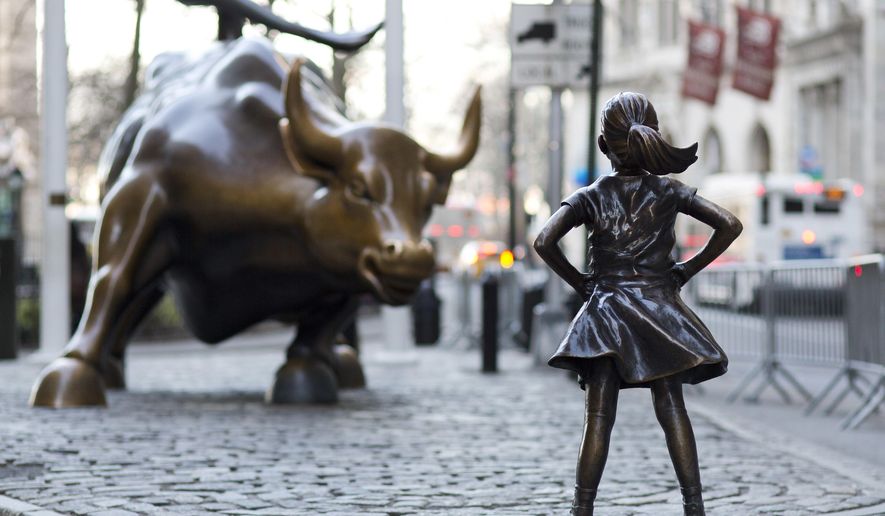 Male executives on Wall Street are so spooked by the #MeToo movement that they’re avoiding women altogether, a Bloomberg report said Monday.

Interviews with more than 30 senior executives suggest that the #MeToo movement has led to “gender segregation” in the workplace, Bloomberg reported.

“It’s creating a sense of walking on eggshells,” one adviser told the publication.

Another said just hiring a woman these days can present “an unknown risk.”

“Women are grasping for ideas on how to deal with it, because it is affecting our careers,” said Karen Elinski, president of the Financial Women’s Association and a senior vice president at Wells Fargo & Co. “It’s a real loss.”

The Bloomberg piece calls the phenomenon the “Pence Effect,” a reference to Vice President Mike Pence, who revealed in April 2017 that he avoids dining alone with any woman other than his wife.

Bloomberg reported that “many of the men interviewed acknowledged they’re channeling Pence, saying how uneasy they are about being alone with female colleagues, particularly youthful or attractive ones, fearful of the rumor mill or of, as one put it, the potential liability.”

The executives interviewed said they no longer have one-on-one business meetings with women or invite them to business dinners. Ron Biscardi, chief executive officer of Context Capital Partners, said he’s done away with his annual penthouse-suite party at the Fontainebleau Miami Beach to avoid any potential liabilities.

“Some men have voiced concerns to me that a false accusation is what they fear,” Stephen Zweig, an employment attorney with FordHarrison, told Bloomberg. “These men fear what they cannot control.”

The Washington Times welcomes your comments on Spot.im, our third-party provider. Please read our Comment Policy before commenting.

Popular In the Community
Sponsored
PETITION ASKING WHITE HOUSE TO DECLARE GEORGE SOROS A TERRORIST GARNERS ENOUGH SIGNATURES FOR REPLY
Celia
2 Sep, 2017
I am still waiting for Obama’s grades … and his real birth certificate. To H___ with Trump’s tax return … I could not care less. The only people that want that are the communists and D-rats among us.As for Soros … he should be exported.
MICHAEL FLYNN COOPERATION ‘SUBSTANTIAL,’ ROBERT MUELLER SAYS
OlivePopcorn
4h
Some story! aAl it is is a headline!,Mueller is a dirty cop ‘ How about that for a headline ?
LINDSEY GRAHAM SEES ‘SMOKING SAW’ TYING SAUDI CROWN PRINCE TO KHASHOGGI KILLING
Johnny Michaels
11h
Congress Punish a foreign dignitary for something done in another country to someone of yet another, different country? How about we mind our own business! When it involves someone, in any way, from our Country, then Congress should become involved, not until then, though..
NORTH CAROLINA 9TH CONGRESSIONAL DISTRICT HOUSE ELECTION REMAINS UNDECIDED AMID FRAUD ALLEGATIONS
Guy Smith
2h
The Tijuanans are fed up with the Caravan of prospective DEM voters
OBAMACARE MEDICAID EXPANSION BENEFICIARIES INELIGIBLE, REPORT FINDS
Waiting4Godot
4h
It’s just shocking that Louisiana’s program is so corrupted… said nobody, ever.
MARC LAMONT HILL CNN FIRING MEETS BACKLASH ON LEFT
JimBonb777
5h
A more witless pack of leftwing dolts could not be imagined.
TRUMP SUPPORTER WEARING MAGA HAT ATTACKED IN ARIZONA
Cicero123
16 Nov
Additional charges could be filed? EXCUSE ME, but the idiot beat up a man do we not think assault and battery might be applicable here?
FOUR ST. LOUIS POLICE OFFICERS CHARGED WITH BEATING UNDERCOVER COLLEAGUE
Andrew Neal
3d
People were outraged at the consistent brutally by police on people of color. So, in an effort to identify and arrest the trouble making black people in the crowds, they send an undercover black officer to join the protest to point them out. Unfortunately, as he was attempting to provide the service he was instructed and paid to perform, he got beat up and attested by his co-workers, because he was black. That sounds like the America I know…
DONALD TRUMP, MELANIA TRUMP PAY RESPECTS TO GEORGE H.W. BUSH
Purple Popcorn
16h
Nice work, Mr. President and First Lady, and rest in peace, Mr. President.
OBAMA-BACKED GREEN ENERGY FAILURES LEAVE TAXPAYERS WITH $2.2 BILLION TAB, AUDIT FINDS
Lemonhead
28 Apr, 2015
Everything Obama touches turns to crap.
HOW A DEMOCRATIC HOUSE WILL AFFECT GUN RIGHTS
Primec
27 Nov
Relax, folks. Nobody’s trying to take away your guns. Just be sure to register them.
HILLARY CLINTON MOCKS TRUMP’S CONFIDENCE IN ‘GUT’ INSTINCTS: ‘YOU CAN’T MAKE THIS STUFF UP’
OliveBus9999
6d
No one cares what you think Hillary!!!!
D.C., MARYLAND SUBPOENA TRUMP ORGANIZATION TAX RETURNS
johne37179
9h
Which witch hunt is this? Talk about a blatant abuse of the justice system!
THE LATEST: BOB DOLE SALUTES FORMER PRESIDENT BUSH
Defy Trump
11m
The image of Trump needing 8 cars to travel 250 yards stands in stark contrast to the image of Bob Dole summoning all of his remaining strength to salute a former president.How far we have fallen…
U.S. THREATENS TO PULL OUT OF NUCLEAR TREATY AFTER RUSSIA FOUND IN VIOLATION
Guy Smith
11h
What’s with all the anti-Russia Propaganda? Didn’t HiLIARy press the RESET Button?