The FDA is set to violate its own lawful requirements for completed clinical trials before approving a drug for general public use, even as the CDC system for reporting “adverse events,”…

The FDA is set to violate its own lawful requirements for completed clinical trials before approving a drug for general public use, even as the CDC system for reporting “adverse events,” including deaths, shows more events in 7 months for the Pfizer/Moderna products than for all other vaccines combined since 1990.

The FDA announcement is expected to open the floodgates for mandatory mRNA injections, on pain of losing one’s livelihood and ability to feed one’s family.

“Though the FDA has yet to disclose a time line for when its work will be done, medical experts and sources familiar with the process tell CNN that full approval could come within the next couple of months.”

Last March 2020, Pfizer and Moderna, filed their plans – protocols – for showing that a drug was, above all, safe. The earliest either set of clinical trials was complete was late into 2022.

In times of sanity, the FDA approves a plan, a “protocol,” which includes clinical trials of certain duration, to show that a drug is safe. When the protocol and trials are complete, the drug company presents its data, and the FDA then approves or denies.

The essence of the FDA announcement is there is now no formal scientific process for determining the safety of what employers may demand people shoot into their veins, or lose their jobs, even when the CDC “early warning system,” the Vaccine Adverse Event Reporting System (VAERS,) is signaling, as many scientists say, anything but “safe and effective.”

Below: Moderna protocol describing 2 years of study for medically attended adverse events, through end of 2022 (source) (Click for larger image)

This is after the pharmaceuticals were already allowed the unheard of step of short-circuiting the normal three to six years of animal trials, which has been scathingly criticized by the original inventor of mRNA vaccine technology, Dr. Robert Malone formerly of the Salks Institute .

Does suddenly eliminating a rigorous, long-term experimental process mean that a drug is not still an experiment?

“There is absolutely no need for vaccines to extinguish the pandemic. I’ve never heard such nonsense talked about vaccines.”

“You do not vaccinate people who aren’t at risk from a disease. You also don’t set about planning to vaccinate millions of fit and healthy people with a vaccine that hasn’t been extensively tested on human subjects,”

Dr. Yeadon was among the first to point out that “new cases” can be manufactured depending on the number of “cycles” a test is set to. It has been admitted by the government that likely a fraction of deaths listed as COVID were actually COVID. It is only the extent to which this is true which is unknown.

Although it is frequently argued that the CDC Vaccine Adverse Event Reporting System (VAERS) does not conclusively determine that a vaccine was the cause of injury or death, that was never the intent of the system. It was set up as an early warning system for signals that a disaster was in the making, so that the government could recall a drug, if necessary, for further investigation. In 1976, the Swine Flu vaccine program was halted after just 25 unexplained deaths, after being administered to 40 million Americans.

If a Harvard-Pilgrim study on adverse event reporting is correct, the VAERS data may represent only 1% of actual reportable events. Regardless of the true magnitude, the CDC concedes that adverse events are vastly under-reported.

The FDA plows ahead despite the dire warnings of many in the science community, including the inventor of the mRNA technology, who say we may be headed for a backlash of harrowing, Biblical proportions.

As if all this were not bad enough, remedies for COVID which are globally recognized as cheap, safe, and effective continue to be banned in the US., even though countries which have encouraged the use of hydroxychloroquine (HCQ) and Ivermectin have consistently reported reductions in COVID mortality of 70%, or more. (HCQ/Ivermectin sources: 1, 2, 3, 4)

The remedies have none of the dire safety concerns that are now rampant over the mRNA shots, except in flawed studies which continue to be cited by the US medical establishment. The suppression of HCQ and Ivermectin in the US and Western nations may explain why, globally, there were no excess deaths in 2020, that is, deaths over the number which would be ordinarily expected.

High excess deaths were seen mostly in Western nations with advanced medical systems, the US, UK, Belgium, Spain, France, Italy, Netherlands. In all of these, HCQ was banned. Other countries which had high COVID deaths per capita where HCQ was banned are Chile, Bosnia, and Colombia. 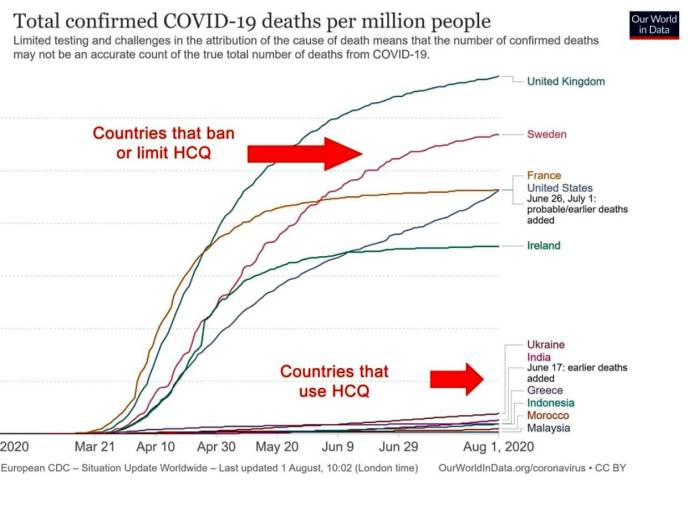 Fauci, the FDA, and the medical establishment have bent over backwards to squash the use of HCQ and Ivermctin. Never reported by CNN is that the FDA, which declares when vaccines are approved, owes half its annual budget to the pharmaceuticals industry. There is no clearer example of official fraud over HCQ than the forced retraction of two HCQ studies from the prestigious Lancet, which concluded the 60-year-old drug was dangerous, after a group of suspicious doctors and scientists showed the data to be faked.

One person who seemed to be especially interested in proving that HCQ didn’t work was Bill Gates. Last year Gates funded a study at the University of Washington, which has a building named after him, which showed that HCQ didn’t work. But the study did not administer the all-important zinc component, which every doctor who wishes to treat COVID with HCQ knows about. Gates, who favors international digital IDs for almost all humans to prove vaccination status, routinely complains of  “crazy, evil conspiracy theories” against him.

Last May, Dr. Stephen Smith, a graduate of the Yale School of Medicine and a former research scientist at the National Institute of Allergy and Infectious Diseases under Fauci, said a “staggering” number of people might have been saved with HCQ treatments.

Below: Gates on Universal Digital IDs, Justified by Vaccination Demands   (view at Bitchute)

For Thee But Not For Me

In the meantime, a video of actor Anthony Hopkins getting the shot shows many celebrity shots may be for show, as his dose gets squirted on the ground.

And reminiscent of 1938 Germany, the New York Times ran a piece whipping up “anger” at those who, if the shots actually worked, which they do not, endanger only themselves and each other by declining the shots. In the manner of a cult, the New York Times even seemed to encourage families to turn on each other.

Eminent Immunologist Explains Why “Delta” Variant is Nothing to Worry About, But the mRNA “Vaccines” May Cause Immune System to Attack Organs

COVID has been held up as the most severe pandemic since the Spanish Flu, although that comparison is blatantly dishonest, because today’s COVID death numbers, even if they are to be believed, are compared to death tolls at a time when the population of the US was less than one-third of what it is now. This alone should peak the suspicion of the critical thinker, as obviously a panic agenda is in play.

The question to ask, always, is: What are you NOT being told?

Dr. Sucharit Bhakdi is Professor emeritus of the University of Mainz, where he served as the chair of the department of medical microbiology and hygiene from 1991 to 2012.  From 1990 to 2012, he served as Editor in Chief of Medical Microbiology and Immunology. In 2001 he was awarded the Aronson Prize for achievements in microbiology and immunology.  Here Dr. Bhakdi explains how the mRNA injections may eventually cause confused immune systems to attack their own organs.

Inventor of mrna Tech Says FDA Was Aware of Spike Protein Dangers Before Granting “Emergency Use,”

Dr, Bhakdi’s analysis dovetails with the concerns of  the inventor of the mRNA technology, Dr. Robert Malone, who says something has gone badly wrong with the mRNA experiment which should have been uncovered in animal trials. Dr. Malone now says those who have taken the injections are in long-term “danger.” Dr. Malone appeared on the Tucker Carlson Show last month. (Links on Dr. Malone: 1, 2, 3)

Whatever happens, Pfizer and Moderna have been released of all legal liability.

(Links to other doctors’ and scientists’ calls for halts to mass vaccinations, partial list: 1, 2, 3, 4.)

Moderna and Pfizer themselves have warned, in their official inserts for the drugs, that “many” people who have certain allergies and conditions “should not” take the shots. Warning of “severe allergic reactions” and “Myocarditis (inflammation of the heart muscle)” and “Pericarditis (inflammation of the lining outside the heart)” Moderna warns, with similar language in the Pfizer fact sheet, that:

Thus Moderna and Pfizer acknowledge what the FDA does not, that the drugs are still being studied for safety, and will be until at least the end of 2022.

Even were the drugs to be approved at the end of clinical trials at the end of 2022, they would still be the most hastily developed novel drugs in US history.

Below: Image from Moderna fact sheet (click for larger image)

What Else Are You Not Being Told?

Upon checking the veracity of the sources here presented, anyone who is not thoroughly alarmed by now probably never will be.

For the rest, there is the question of: What else are you not being told? This blog will end with these and recommendations for further reading.

It began with a request from governments for 2 weeks to “slow the spread” of a virus from China, which it now seems was made in a lab, and has morphed into permanent state authority to order nearly anything in the name of public health. It is not great leap to wonder: Is this a coincidence?

Below: Tucker Carlson Speaks with Victims’ Family (view at Bitchute)

Below: On the corruption of the “Medical Establishment”: ‘“The Illusion of Evidence-Based Medicine”

Reports from mRNA “Vaccine” Takers on Killing of “God Gene,” Separation from God

Pfizer and Moderna Warn That “Many” People “Should NOT Get” the Shots, Under Any Circumstances

Latest Data Shows No Excess Deaths From All Causes Globally in 2020, Pandemic Mostly in US and Small Number of Countries

Why Did Fauci Give Funds to the People’s Liberation Army?

TAKE ACTION: SEND LETTERS TO BAN VACCINE PASSPORTS TO ALL YOUR STATE REPRESENTATIVES IN 30 SECONDS! (FREE, ALL STATES)