During the AIDS epidemic in the 1980s, Dr. Anthony Fauci discouraged and prevented inexpensive treatments for AIDS and focused exclusively on AZT. He’s doing the same thing today with COVID, focusing on highly profitable vaccines and ignoring potentially safe and effective treatments. 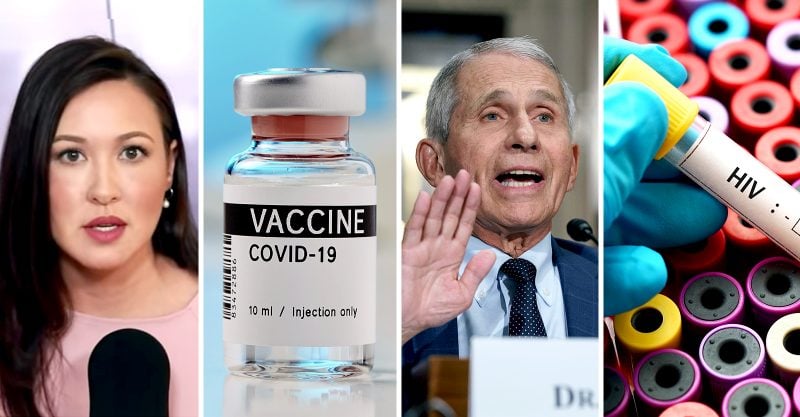 In a new video on The Hill’s “Rising,” political commentator Kim Iversen analyzes Dr. Anthony Fauci’s support for azidothymidine (AZT) to treat HIV/AIDS and compares it to his current support for COVID mRNA vaccines.

Fauci, named head of the National Institute of Allergy and Infectious Diseases in 1984, sparked panic among Americans in the 1980s when he wrote in a medical journal that AIDS could be transmitted not only through sexual contact and sharing needles, but also through “ordinary close contact” with the infected.

Iversen says Fauci’s remarks followed the discovery of an infant diagnosed with AIDS — a case we would later learn was caused when the child passed through the womb of an infected mother.

But the damage was already done, said Iversen:

“Public panic had intensified and people were fearing they could get aids from sharing a toilet seat or even from shaking hands. People living with AIDS were being alienated and ostracized from their jobs, homes, communities, and gay men, in particular, were heavily stigmatized.”

Meanwhile, Fauci and his team of scientists at the National Institutes of Health (NIH) went full speed ahead on developing a vaccine for AIDS. However, despite promises from the U.S. Department of Health and Human Services that it would roll out an AIDS/HIV vaccine, Iversen says that never happened.

Few studies were done, said Iversen, and the long-term side effects were unknown. But in March 1987, the U.S. Food and Drug Administration approved AZT, claiming the benefits outweighed the risks.

Celia Farber, who in 1989 reported on the approval of AZT and its potential health risks, wrote at the time:

“The majority of those in the AIDS-afflicted and medical communities held the drug up as the first breakthrough on AIDS. For better or worse, AZT had been approved faster than any drug in FDA history, and activists considered it a victory. The price paid for the victory, however, was that almost all government drug trials, from then on, focused on AZT — while over 100 other promising drugs were left uninvestigated.”

The drug was “one of the most toxic, expensive and controversial drugs in the history of medicine,” Farber wrote.

In 1989, Iversen said Fauci started promoting the drug not only for critically ill AIDS patients, but for anyone who tested positive for HIV, including those who were asymptomatic and showed no sign of the disease.

Despite limited data, the NIH went all in on AZT, ignoring evidence that the drug was toxic, caused liver damage and destroyed white blood cells, Iversen said.

“The drug continued to be used for years,” she explained.

Iversen made the same observation: “As Fauci and the NIH focused on vaccines and AZT for the treatment of aids, hundreds of drugs went unstudied.”

“Many doctors advocated that the best way to treat patients was to focus on mitigating the severity of the ailments that would ultimately kill them rather than trying to eradicate AIDS altogether, that the virus mutates too quickly to waste all resources and time on a vaccine or other preventatives that everything should be studied, all avenues explored and all options should remain on the table. But unfortunately, that’s not exactly how the AIDS epidemic was handled.

“Big pharma got their payday. Millions of dollars were allocated by Congress to vaccine research, which never produced anything effective. And meanwhile, along the way, hundreds of drugs and treatment options went unexplored. And we still don’t have a cure for HIV. The epidemic never went away like people hoped. We do, however, have effective treatments that help people live a good long life with the virus.

“There were a lot of mistakes made along the way. A lot of lessons that could have been learned, but after looking into the history of the AIDS epidemic, it’s curious if we’ve actually learned any. Here we are today, with a pandemic that is causing mass hysteria. Like the days of people demonizing gay men as the culprits behind the epidemic, we have the media demonizing the unvaccinated as the root cause for why this virus just won’t go away.”

Iversen said that while many hoped the vaccine would eliminate COVID, like AIDS, the virus appears to mutate too rapidly.

“The same way Fauci discouraged and prevented inexpensive treatments from being talked about, researched and prescribed” in the 1980s is the “same thing that’s happening today,” said Iversen.

Governments should be exploring every possible option to treat COVID, Iversen said, including inexpensive treatments, and treatments that aren’t so profitable for the pharmaceutical industry.

“Everything should be studied,” Iversen said, “but just like what happened during the AIDS epidemic that just doesn’t seem to be happening.”