“Prepare slaughter for the children for the iniquities of their fathers.” “evil”

He is quoted as saying:

“When a man has done that kind of evil, they are long gone and dead, but they’ve produced offspring, and it doesn’t seem like the offspring are better than those that did the evil because the children are doing the same things as their fathers,” Farrakhan proclaimed.

Looking to the scriptures to support his position Farrakhan said, quoting scripture,  “Prepare slaughter for the children for the iniquities of their fathers.”

“I’m calling on all of the soldiers that fight for America, come home and let’s unite and fight for our lives since the federal government refuses to fight for us. We must fight for ourselves!” 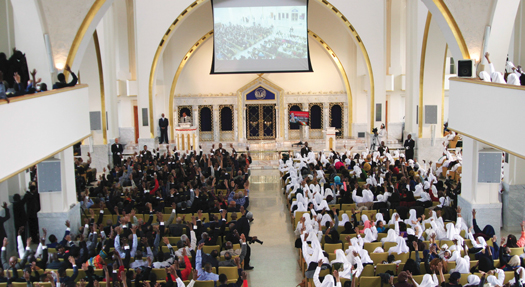 The crowd raised their hands showing they agreed with what Minister Farrakhan said during Part 2 of his Saviours’ Day 2015, keynote message titled “The Intensifying Universal Cry for Justice.” Photo: Tim 6X

“We live in a time of terror. Everybody White people don’t like is a terrorist. Is everyone a terrorist? Why are you so terrified?” Farrakhan declared. “What terrorizes [Whites] is the presence of God and a messenger from God that signals the end of their civilization.”

“The grace that came yesterday is not here today because in the Day of Judgment, you should expect what you put out, and the only thing between us and the consequences of our actions is the grace and power of God to delay the punishment or avert the punishment”, he told the enthusiastic people in attendance.
Please keep in mind Farrakhan did in deed threatened that blacks would “tear this goddamn country up” as retaliation for the “injustice” in Ferguson.

Nation of Islam leader Louis Farrakhan went on a fiery tirade about Ferguson on Saturday — threatening that if the demands of protesters aren’t met, “we’ll tear this goddamn country apart!” Read more at http://newsinqueue.com/farrakhan-on-ferguson-well-tear-this-gdamn-country-up/#mKCRwtoco3chpdIq.99

Louis Farrakhan, the “Nation of Islam leader” went on a RACIST tirade about the former New York City Mayor Rudy Giuliani’s criticism of Obama’s patriotism, saying in his Sunday ‘sermon’ that Giuliani was a “privileged cracker” and a “devil.”

“Giuliani says Obama does not love America,” Farrakhan said, “And instead of apologizing he doubled down and said, “I’m not taking this back. He didn’t grow up like we grew up.”