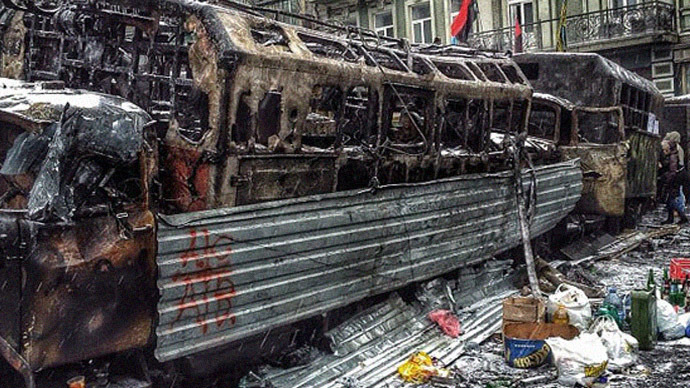 The Ukrainian capital has been covered in plumes of black smoke as helmeted riot police moved in on the demonstrators in an attempt to dismantle a protest camp after three days of street fighting. Several protesters have reportedly died in clashes.

Armored personnel carriers (APC) are now seen roaming central Kiev. Some scenes of violent riots in the Ukrainian capital are reminiscent of big-budget Hollywood blockbusters, where in an odd collision of genres a WWII epic drama, Enemy At The Gates, meets a post-apocalyptic video game, Fallout. New clashes broke out on Wednesday as the police arrested protesters and created a large hole in barricades set up behind the burned-out wrecks of destroyed police buses, according to AFP. RT’s Aleksey Yaroshevsky reported it was getting harder to breathe because of all the smoke rising as the rioting crowd set fire to tires underneath the ‘Dinamo’ soccer stadium.

For more photos of the Kiev protests, see RT’s Gallery. Dare-devil anti-government protesters, who have been out in the street for several weeks, have built up barricades from burnt police buses and heavy trucks. They have been using overturned vehicles as shields against officers. A number of smashed vehicles were set on fire. Stun grenades, tear gas, gas canisters and, reportedly, rubber bullets were aimed at the demonstrators as they tried to reach parliament. Hundreds have been injured in recent days. Demonstrators wearing hard hats and face masks burned police vehicles adding fuel to the fire of the post-apocalyptic scene, as snow leisurely covered the mishmash of ashes, debris and stones. Thousands of indefatigable demonstrators were busy gathering piles of stones ahead of the new series of violent attacks, as others prepared Molotov cocktails to be thrown at officers. Some protesters could be seen drumming on burnt vehicles and empty barrels, with their “drums of war” roaring whenever new clashes erupted. People have been camping out behind barricades on the Euromaidan (Kiev’s Independence Square) for almost two months. The crisis broke out in late November when President Viktor Yanukovich demurred from signing a cooperation deal with the European Union. Tensions escalated last week when the Ukrainian president pushed through harsh anti-protest legislation.