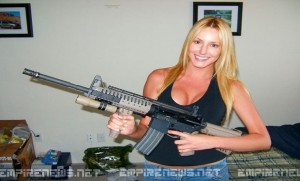 Facebook CEO Mark Zuckerberg confirmed rumors this morning that the company would be handing over names and photos of site users who have posted pictures of themselves with guns to the government. Democrat leaders applauded Facebook’s move, stating that it is important to know who has guns in America, especially since many of the weapons that they’d seen could very well be unregistered.

Despite the excitement from the radical left, many Facebook users, regardless of political stance, were naturally outraged that their ‘private’ photos would be handed over to the Department of Homeland Security.

”I don’t understand what the big deal is, I mean it’s right there in the user agreement. Line 27 , page 134 of the policy that all users agree to when signing up. The subject clearly states ‘Any and all user information will be shared with Homeland Security upon request from the department.’ It’s right there in black and white. Or blue and white, as the case may be.”

When asked why Facebook would be so willing to work with the government, Zuckerberg said that he was just trying to ‘do his patriotic duty.’

“I added that line back in after 2009, when Obama took office. After he was elected, he came to me and asked for my help, saying that he wanted to ‘transform America,’ and he couldn’t do that until the country was disarmed,” said Zuckerberg. “This is a perfect way to find the gun nuts in this country, and keep a watch over them. I think the whole thing has been a huge success, and I for one can’t wait to live in a gun-free America.” More at Source