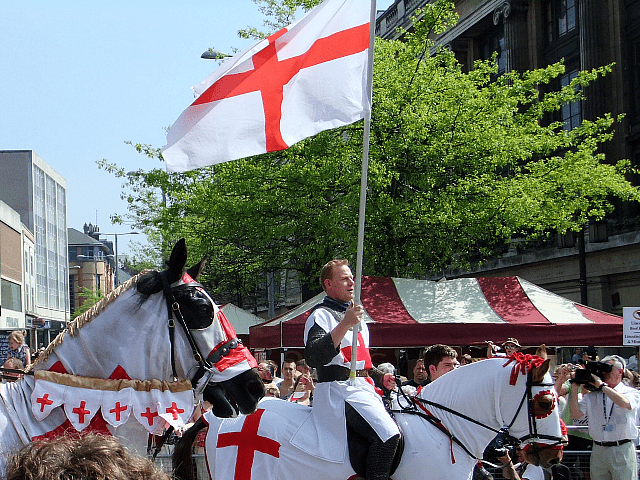 Facebook has admitted to banning swathes of users for posting messages saying they were “Proud to be English” on St George’s Day.

Facebook has admitted to banning swathes of users for posting messages saying they were “Proud to be English” on St George’s Day.

As England’s patron saint, St George’s Day has long been celebrated as the English national day — if with less official enthusiasm than St Patrick’s Day in neighbouring Ireland, given the embarrassment of much of the academic, media, and political establishment at expressions of “Englishness”, which they have associated with racism and imperialism.

Someone, some group, or some algorithm moderating also appears to have bought into this mentality, with people who marked St George’s Day with messages expressing pride in the country and their heritage reporting that they were banned from the social media platform.

An image bearing the legend “Proud to Be English” and two crossed flagpoles carrying the English St George’s Cross and the white lion on a red field — a banner associated with Anglo-Saxons — appears to have proved particularly offensive to the so-called “Masters of the Universe“.

Facebook would eventually confirm that claims they were banning people for the “Proud to be English” posts were true — but that this was “likely” a “mistake”.

“We’re investigating what happened. Our team reviews millions of pages, posts and images each week and we occasionally make a mistake, as has likely happened here,” a spokesman said in comments reported by The Sun.

“We have removed any restrictions placed on the impacted accounts,” they continued, adding that “We apologise for any upset caused.”

Hostility to St George’s Day in 2020 was not just limited to Big Tech and establishment figures, however, with one couple who celebrated the English national day by putting up a model of the country’s patron saint holding a sign saying “The NHS will slay Covid-19” — a reference to his legendary dragon-slaying exploits — having their home vandalised with “NAZI” graffiti and 50 bags of dog faeces thrown into the garden.

Source: Facebook Admits Banning Users for Saying They Are ‘Proud to Be English’