China’s leading virologist on bat-borne viruses lost sleep worrying that coronavirus could have leaked from her lab in Wuhan upon learning of its spread in December. She now tells those who share those same concerns to “shut their stinking mouths.”

China’s top virologist on bat-borne viruses said she lost sleep over the possibility that the novel coronavirus could have leaked from her lab in Wuhan.

A molecular biologist who has been quoted as a coronavirus expert by The Washington Post and MSNBC said Thursday in no uncertain terms that the novel coronavirus could have been unleashed due to a leak from the Wuhan Institute of Virology.

China’s top virologist on bat-borne viruses, Shi Zhengli, has sworn on her life that the virus did not leak from her Wuhan lab, saying that its spread was “nature punishing the human race for keeping uncivilized living habits.”

But Richard H. Ebright, a professor of chemical biology at Rutgers University, told the Daily Caller News Foundation on Thursday that there is a real possibility that the virus entered the human population due to a laboratory accident.

When asked specifically if he believes the virus could have leaked from Shi’s lab in Wuhan, Ebright said: “Yes.”

“A denial is not a refutation,” Ebright said. “Especially not a denial based on ‘nature punishing the human race for keeping uncivilized living habits.’”

And while Shi now tells those who question whether her lab could be connected to the release of the coronavirus to “shut their stinking mouths,” she previously said she lost sleep worrying about the possibility that her lab in Wuhan could have been responsible for the virus’s release.

Shi, known by her colleagues as the “bat woman” because of the 16 years she has spent hunting for viruses in bat caves, told Scientific American in March that she frantically searched for any evidence that her laboratory’s records were mishandled upon learning of the virus’s outbreak in Wuhan in late December.

“Could they have come from our lab?” Shi recalled thinking.

“I had never expected this kind of thing to happen in Wuhan, in central China,” she noted, saying that her studies had shown that southern China posed the greatest risk of coronaviruses jumping from animals to humans.

Shi said she breathed a sigh of relief when results came back showing that the sequences of the coronavirus did not match the viruses she and her team had sampled from bat caves.

“That really took a load off my mind,” Shi said. “I had not slept a wink for days.”

Shi and her colleagues at the Wuhan Institute of Virology reported in early 2017 that after five years of surveying they had discovered 11 new strains of SARS-related viruses in horseshoe bats from China’s Yunnan Province. The virologist said at the time that the 11 strains contained all the genes to make a SARS coronavirus similar to that of the 2003 outbreak.

Shi contributed to a study published in February reporting that the novel coronavirus is 96.2% identical to a viral strain that was detected in horseshoe bats from the Yunnan Province.

However, two Chinese researchers noted in a separate paper in February that the horseshoe bats that are known to carry the nearly-identical viral strain live 600 miles away from Wuhan. The researchers also cited testimonies from nearly 60 people who lived in or visited Wuhan saying that the bat “was never a food source in the city, and no bat was traded in the market.”

“The killer coronavirus probably originated from a laboratory in Wuhan,” the two Chinese researchers noted in their paper, which was uploaded to Research Gate on Feb. 6.

The paper was removed from Research Gate on Feb. 14 or 15, according to internet archives. The paper’s lead researcher, Botao Xiao, didn’t return the DCNF’s emails on Thursday seeking comment. Research Gate also did not respond when asked about the paper’s removal from their site.

Ebright, the Rutgers University molecular biologist, told Beijing-based news outlet Caixin Global in February that while there is “no basis to suspect the virus was engineered,” the available data indicates that the virus’s introduction into human populations could be attributed to either natural causes or to a laboratory mishap.

The Washington Post and MSNBC have quoted Ebright saying that theories about the virus being a bioweapon should be “firmly excluded,” but neither outlet included his belief that the possibility that the virus entered the human population through a lab accident “cannot–and should not–be dismissed.” 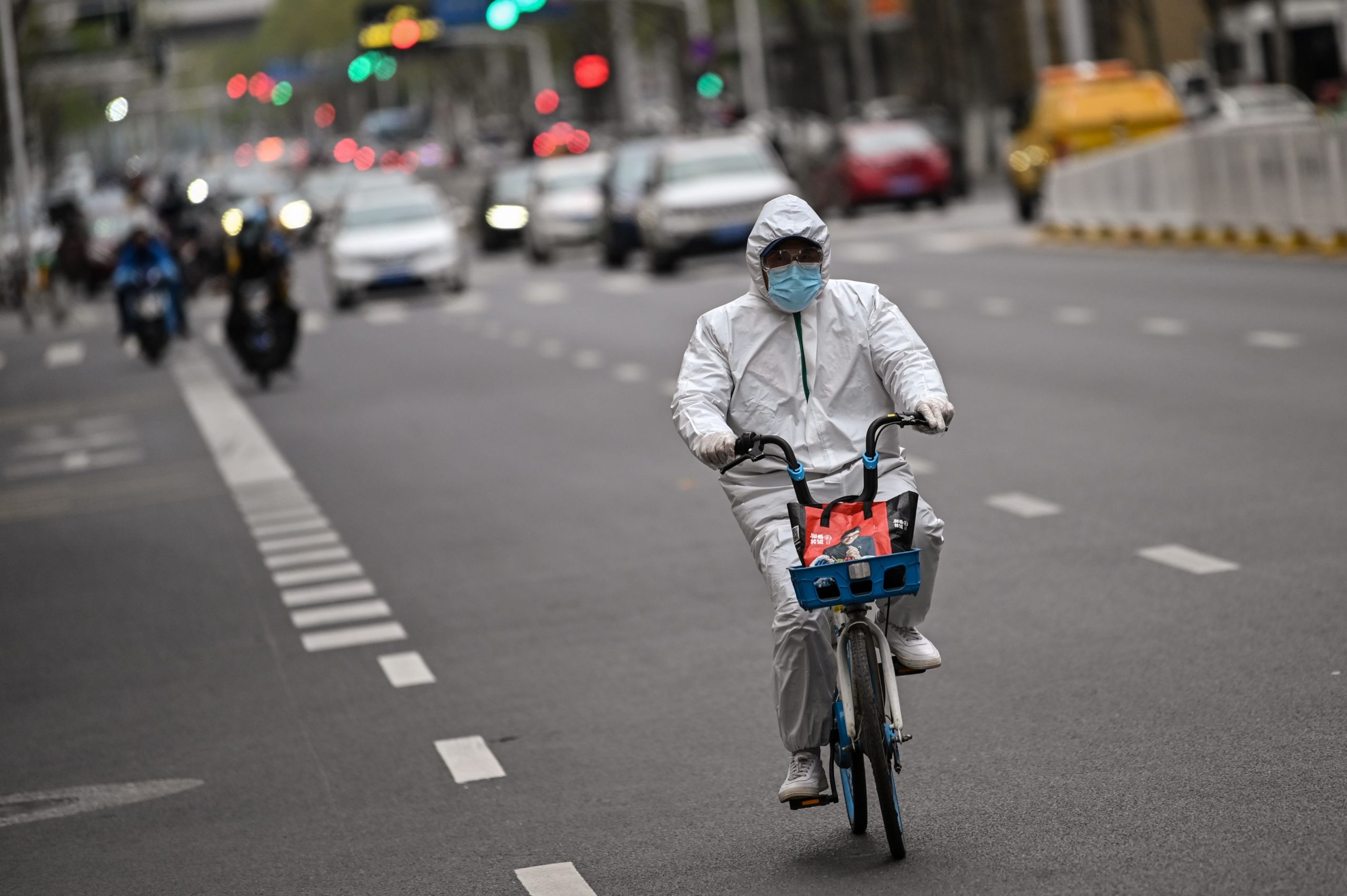 A person wearing a protective suit rides a bike on a Wuhan street. (HECTOR RETAMAL/AFP via Getty Images)

Shi has furiously denied that the novel coronavirus could have leaked from her lab at the Wuhan Institute of Virology.

“The novel 2019 coronavirus is nature punishing the human race for keeping uncivilized living habits. I, Shi Zhengli, swear on my life that it has nothing to do with our laboratory,” she wrote on a Chinese social messaging app in early February, according to Caixin Global. “I advise those who believe and spread rumors from harmful media sources … to shut their stinking mouths.”

Deadly viruses have a history of escaping from Chinese laboratories.

The SARS virus escaped twice from the Chinese Institute of Virology in Beijing in 2004, one year after the virus was initially contained.

The Chinese government has been widely criticized for misleading the world about the novel coronavirus outbreak from its earliest stages.

One of the first doctors in Wuhan to raise the alarm about the spread of a SARS-like virus in the city was detained by police in December and told to “stop making false comments.”

That doctor, Li Wenliang, died from coronavirus in February.

Another Chinese doctor, Ai Fen, claimed she was silenced by her bosses when she tried to warn about the virus during its early stages. Ai’s whereabouts as of Sunday are currently unknown, according to 60 Minutes Australia, sparking fears that she has been detained.

And on Wednesday a top Chinese health official announced that the country will begin counting coronavirus cases from patients that show no symptoms, a tactic acknowledgment that Beijing had underreported its official tally of known coronavirus cases since the start of the pandemic.

Republican Sen. Tom Cotton of Arkansas told the DCNF on Wednesday it is wholly appropriate to question whether the coronavirus outbreak originated from labs in Wuhan that were studying coronaviruses.

“The reason I have raised these questions from the very beginning is because of China’s statements and their actions,” Cotton told the DCNF. “After concealing the virus for many weeks in December and then minimizing its severity for most of January, they then peddle an origin story about the food market in Wuhan.”

“Given their dishonesty and the proximity of these labs, which we know were working with coronaviruses, it is only reasonable and responsible for us to ask the question and demand the answers.”