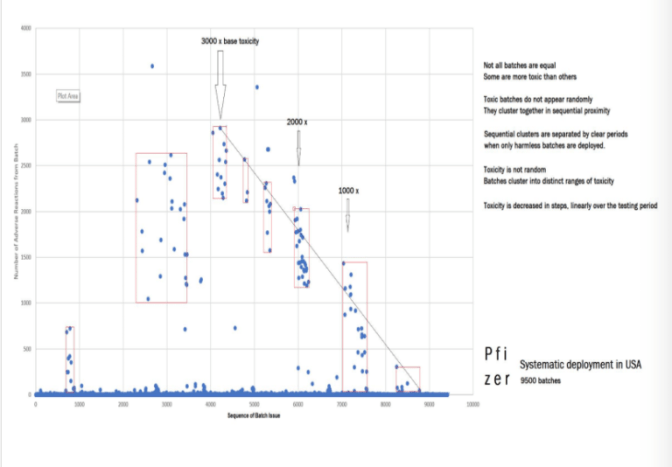 CDC death and adverse event report data for Pfizer, Moderna, and J&J Covid vaccines in the US shows that some batches, representing millions of doses, are up to 5,000 times more lethal than others, and likely to cause death, serious side effects, and permanent disabilities.

Moreover, the CDC shows that the batches were released systematically over time, by all three manufacturers, in an apparent effort to determine the lethality of stronger or weaker doses.

In the US, COVID vaccine-associated deaths are now 10,000% higher than all other vaccines combined, in CDC’s “early warning” system. (See; Scientists in Top Peer-Reviewed Journal Say True Number of Vaccine Deaths May be in “Hundreds of Thousands”)

“You’ll be aware that one of our assiduous researchers noticed a short while ago that adverse events are not occurring randomly throughout the batches & lots of vaccines made by a given manufacturer.

Instead, it appears that just 5% of the batches / lots are associated with almost all the deaths.

Given the tight requirements of consistency associated with an authorised product, it’s absolutely impossible that this is a chance event.” 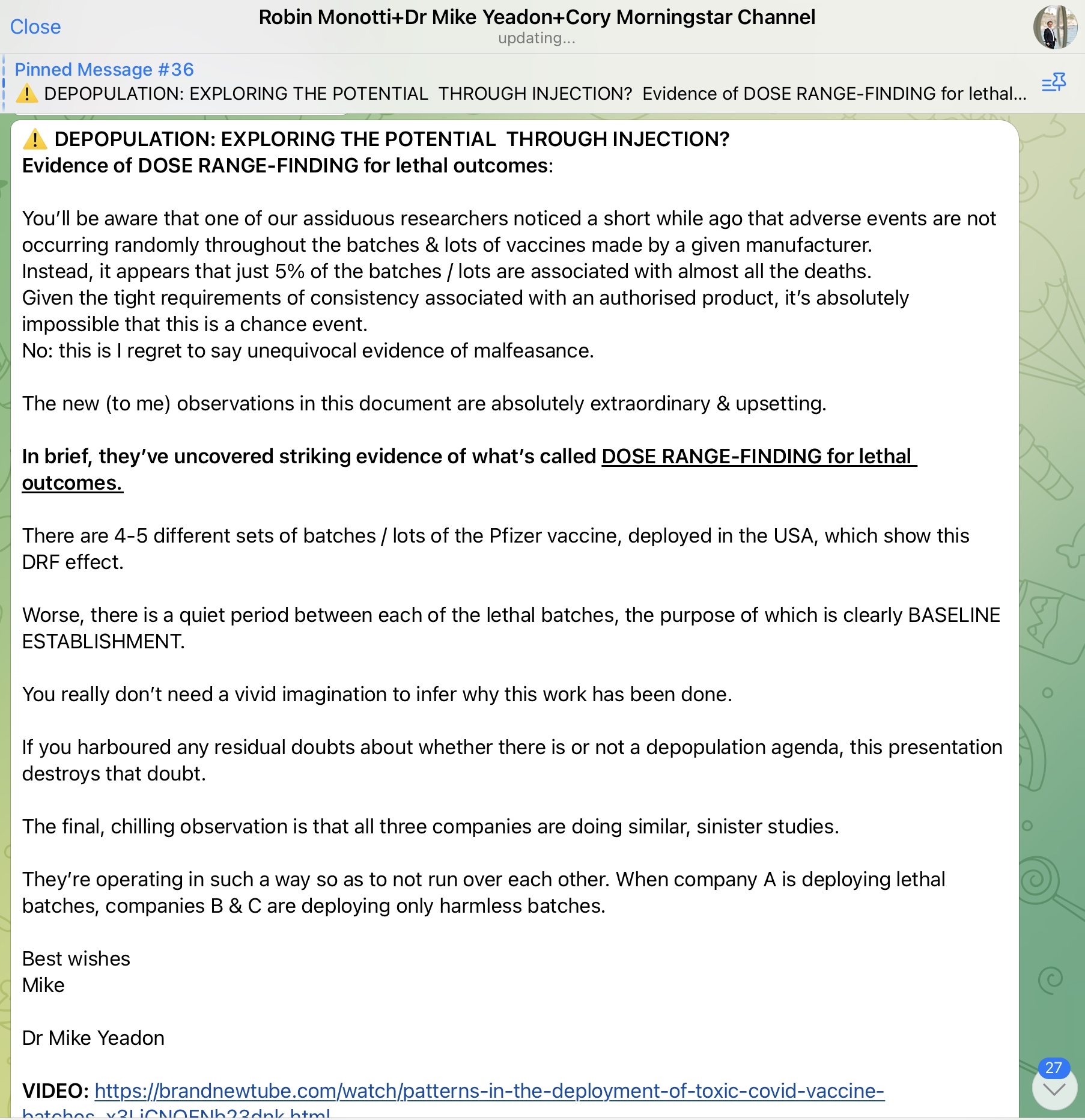 Yeadon went on to say that the findings, which can be replicated since the CDC data is public, are “unequivocal evidence of malfeasance.”

In April of this year Dr. Yeadon, in an interview, said that he had come to the reluctant conclusion that a long series of coordinated, “demonstrable lies” being put forth by governments, the medical establishment, and the media over a year were evidence that a “massive depopulation” agenda might be in play.

Dr. Yeadon and Others File Crimes Against Humanity Charges in the Hague

In September of 2021, a team of German pathologists and other doctors and scientists presented the results of multiple autopsies of people who had died unexpectedly within two weeks of receiving Covid vaccinations, and concluded that up to 40% of the bodies they examined had died as a direct result of the vaccines. All of the bodies examined were over age 50.

The pathologists calculated that, for a certain broad age group, takers of the shots were 15 times more likely to die from the shots than from COVID. (See CoronaNews: “Top Pathologists: Autopsies Show 40% of Deaths After COVID Vax Are Due to Vaccine-Induced Organ Attack“)

Below: September 20th, 2021, Conference at Pathological institute in Reutlingen, Germany, “Cause of death after COVID-19 vaccination & Undeclared components of the COVID-19 vaccines“  (view below video at Bitchute) 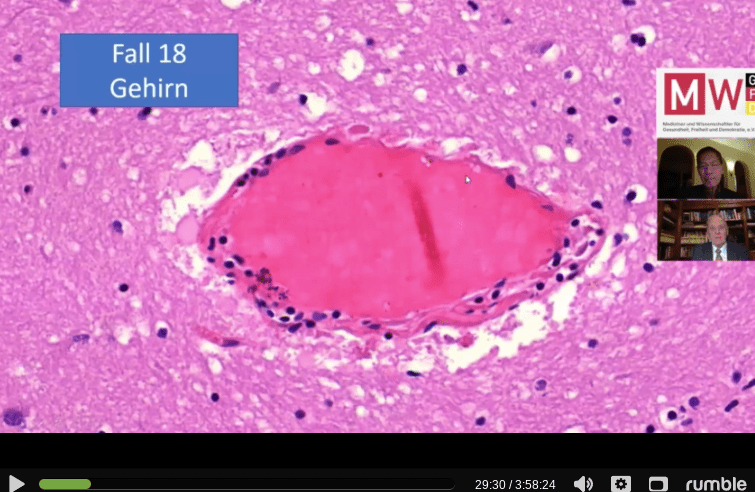 On January 2, 2022, Dr. Robert Malone, the inventor of mRNA vaccine technology and a fierce critic of the hastily produced Pfizer and Moderna injections and Covid mandates, called attention in his Substack webpage to a report from the CEO of the major life insurance company, OneAmerica, that the death rate in the US for ages 18 – 64 was up 40%, and that the causes were not Covid. Dr. Malone wrote:

“AT WORST, this report implies that the federal workplace vaccine mandates have driven what appear to be a true crime against humanity.

OneAmerica CEO Scott Davison made his comments on Jan. 1, 2022 in The Center Square, in “Indiana life insurance CEO says deaths are up 40% among people ages 18-64.” OneAmerica was  founded in 1877 , and has assets of $74 billion under its management.

Upon examining the data compilation of CDC death and injury reports by Craig Paardekooper, Dr. Yeadon, as a pharmaceuticals scientist, says that he immediately recognized an apparent methodology called “dose range finding,” in which varying strengths of dosage are scientifically administered in order to accurately peg the number of deaths and injuries which can be associated with each dosage level. After Pfizer, Dr. Yeadon founded the successful biotech company Ziarco, which was acquired by Novartis.

For a better understanding, Dr. Yeadon recommended Craig Paardekooper’s presentation of his findings, in the video below.

The following chart in the presentation shows the Pfizer deployment of toxic vaccine batches. The vertical axis is number of adverse events, including deaths. The horizontal axis the chronological deployment of batches, by batch issue date. Paardekooper’s paper explaining this chart is HERE. 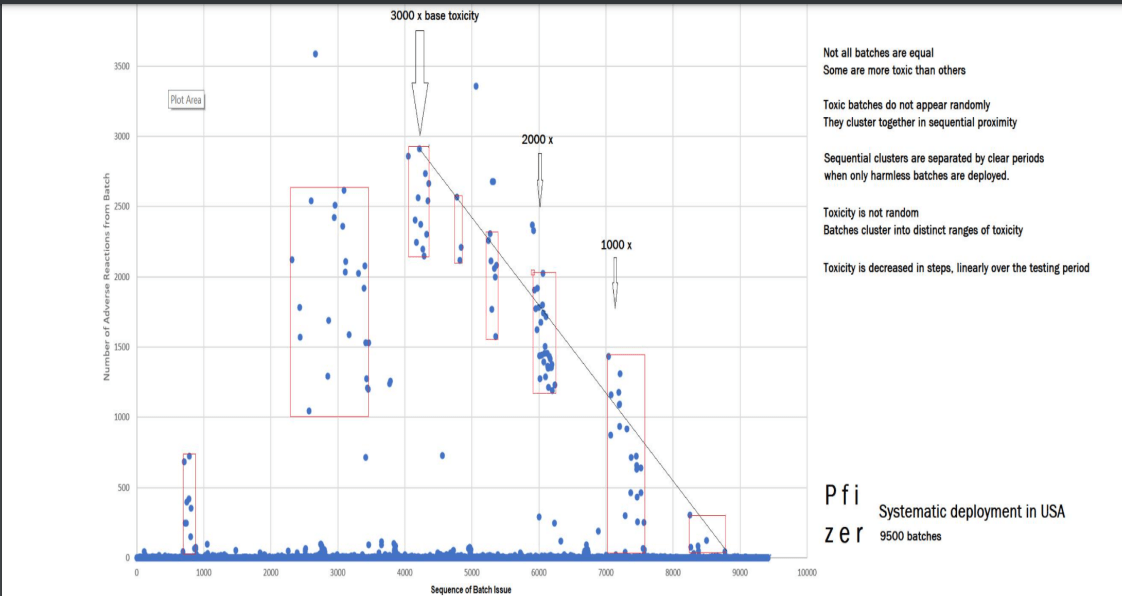 Dr. Jessica Rose has pointed out that batch issue date does not necessarily correspond to when the batches were actually used. But Dr. James Hill, MD, has rebutted that this does not negate the findings, but is simply a call for further research into the actual timing of the batches’ deployments.

Dr. James Hill, MD has reported on the findings in his Substack “Vaccine batches vary systematically in toxicity and are distributed to unsuspecting Americans by three companies”:

Anyone Can Find Out How Deadly Their Batch Is

Paardekooper has put together the website How Bad is My Batch in which anyone can find their Covid vaccine batch number and see the number of deaths and adverse events associated with it.

In an interview with attorney Reiner Fuellmich, who is conducting a number of legal actions against various parts of the government Covid agenda, the possible proof of premediation on the part of the vaccine industry in knowingly causing death and injury removes any legal shield from liability that the industry may presently have, video below.

Best estimates are that COVID is a 99.9% recovery rate virus, similar to flu, according to Stanford epidemiologist Dr. John Ioannadis. Common flu is 99.9%.