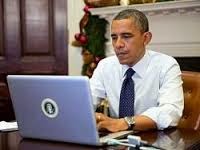 “We have owned the internet,” Obama stated in an interview with the technology portal Re/Code, during his summit on cyber-security in Silicon Valley on Friday. “Our companies have created it, expanded it, perfected it in ways that they can’t compete. And oftentimes what is portrayed as high-minded positions on issues sometimes is just designed to carve out some of their commercial interests.”

By the President’s own admission, his relationship with Silicon Valley “has historically been very good. Many of these folks are my friends, and have been supporters, and we interact all the time.” Obama’s chief technology officer, Megan Smith, was a Google executive before accepting the White House job …. http://rt.com/usa