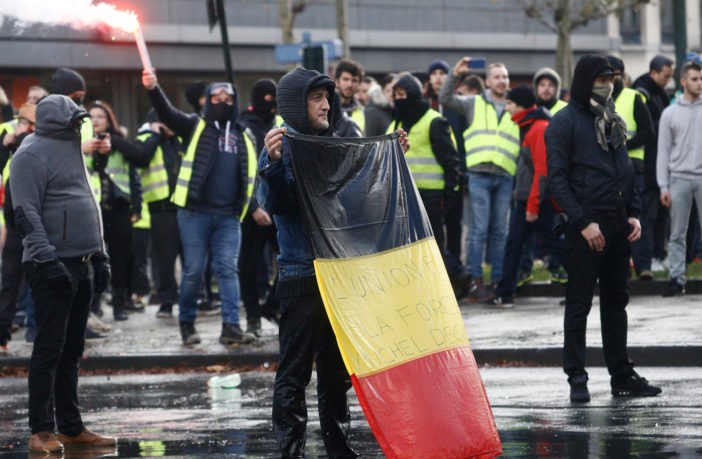 It’s surprising how easily the fuel tax protests from France could spread to Belgium and the Netherlands. The demonstrations of people in yellow vests signal a large dissatisfaction of the people over their governments.

Source: Europe is on the brink of a working class revolution against globalist governments

It’s surprising how easily the fuel tax protests from France could spread to Belgium and the Netherlands. The demonstrations of people in yellow vests signal a large dissatisfaction of the people over their governments.

France’s fuel protests have partly turned into anti-Macron protests as well. Under his leadership taxes are increased, but he forgets to protect the French people and their culture.

It’s the same for Belgium and the Netherlands. Their leaders lead their country like modern companies, making a profit is seen by them as a success.

But in the meantime some much more important issues are being ignored. An increasing number of people are worried about immigration, about poverty and about the future of their children.

Many of these people can’t be classified according to a political direction. They can be left or right, but most share at least one characteristic: They are hard working middle class people.

These people are barely represented in Western Europe. The media calls them xenophobes, the right and far-left anarchists and politicians don’t seem to listen to them as some of their parties are banned from government coalitions.

This democratic deficit leads to a tension that especially globalist politicians don’t see as they are focused on trade, the UN and international relations.

The story is completely different for Eastern or Central Europe. While being called authoritarian regimes by mainstream media and the EU, Hungary and Poland do seem to listen to their people.

A referendum in Hungary showed that 98 per cent of people don’t want migrants and refugees and the government accepted that.

Hungarian Prime Minister Orban said he would go to Brussels with that democratic result “to ensure that we should not be forced to accept in Hungary people we don’t want to live with”.

But in Western European countries dissatisfaction increases by the day. There were never referendums on accepting hundreds of thousand of refugees and it seems like a silent majority is done with having to deal with the horrible side effects.

Just like they are done with higher taxes and with globalist leaders who don’t put their countries’, but the EU’s, interests first.

As long as democracy fails its people the chances for a non-violent revolution are increasing as momentum is building up. It has been a long time since something as promising as the yellow vests protests showed up in Europe.

If Germany and the UK join France, Belgium and the Netherlands, the start of a working class revolution could be there.