“I’ve shown photos taken from space and from aircraft which clearly demonstrate the scale of the illegal trade in oil and petroleum products,” Vladimir Putin told reporters earlier this month on the sidelines of the G-20 summit in Antalya. Putin was of course referencing Islamic State’s illicit and highly lucrative oil trade, the ins and outs of which we’ve documented extensively over the past two weeks:

Turkey’s move to shoot down a Russian Su-24 warplane near the Syrian border afforded the Russian President all the motivation and PR cover he needed to expose Ankara’s alleged role in the trafficking of illegal crude from Iraq and Syria and in the aftermath of last Tuesday’s “incident,” Putin lambasted Erdogan. “Oil from Islamic State is being shipped to Turkey,” Putin said while in Jordan for a meeting with King Abdullah. In case that wasn’t clear enough, Putin added this: “Islamic State gets cash by selling oil to Turkey.”

To be sure, it’s impossible to track the path ISIS oil takes from extraction to market with any degree of precision. That said, it seems that Islamic State takes advantage of the same network of smugglers, traders, and shipping companies that the KRG uses to transport Kurdish crude from Kurdistan to the Turkish port of Ceyhan. From there, the oil makes its way to Israel and other markets (depending on which story you believe) and if anyone needs to be thrown off the trail along the way, there’s a ship-to-ship transfer trick that can be executed off the coast of Malta. The maneuver allegedly makes the cargoes more difficult to track.

Some believe Erdogan’s son Bilal – who owns a marine transport company called BMZ Group – is heavily involved in the trafficking of Kurdish and ISIS crude. Most of the ships BMZ owns are Malta-flagged.

In light of the above, some have speculated that Turkey shot down the Su-24 in retaliation for Russia’s bombing campaign that recently has destroyed over 1,000 ISIS oil trucks. Here’s what Syrian Information Minister Omran al-Zoub said on Friday:

“All of the oil was delivered to a company that belongs to the son of Recep [Tayyip] Erdogan. This is why Turkey became anxious when Russia began delivering airstrikes against the IS infrastructure and destroyed more than 500 trucks with oil already. This really got on Erdogan and his company’s nerves. They’re importing not only oil, but wheat and historic artefacts as well.”

Al-Zoub isn’t alone in his suspicions. In an interview with RT, Iraqi MP and former national security adviser, Mowaffak al Rubaie – who personally led Saddam to the gallows – said ISIS is selling around $100 million of stolen crude each month in Turkey. Here are some excerpts:

“In the last eight months ISIS has managed to sell … $800 million dollars worth of oil on the black market of Turkey. This is Iraqi oil and Syrian oil, carried by trucks from Iraq, from Syria through the borders to Turkey and sold …[at] less than 50 percent of the international oil price.”

“Now this either get consumed inside, the crude is refined on Turkish territory by the Turkish refineries, and sold in the Turkish market. Or it goes to Jihan and then in the pipelines from Jihan to the Mediterranean and sold to the international market.”

“Money and dollars generated by selling Iraqi and Syrian oil on the Turkish black market  is like the oxygen supply to ISIS and it’s operation,” he added. “Once you cut the oxygen then ISIS will suffocate.”

“There isn’t a shadow of a doubt that the Turkish government knows about the oil smuggling operations. The merchants, the businessmen [are buying oil] in the black market in Turkey under the noses – under the auspices if you like – of the Turkish intelligence agency and the Turkish security apparatus.”

“There are security officers who are sympathizing with ISIS in Turkey. They are allowing them to go from Istanbul to the borders and infiltrate … Syria and Iraq.”

“There is no terrorist organization which can stand alone, without a neighboring country helping it – in this case Turkey.”

That’s pretty unequivocal. But it gets better.

On Monday, Putin was back at it, saying that Russia has obtained new information that further implicates Turkey in the Islamic State oil trade. “At the moment we have received additional information confirming that that oil from the deposits controlled by Islamic State militants enters Turkish territory on industrial scale,” Putin said on the sidelines of the climate change summit in Paris. “We have traced some located on the territory of the Turkish Republic and living in regions guarded by special security services and police that have used the visa-free regime to return to our territory, where we continue to fight them.”

“We have every reason to believe that the decision to down our plane was guided by a desire to ensure security of this oil’s delivery routes to ports where they are shipped in tankers,” he added, taking it up another notch still.

As for Erdogan, well, he “can’t accept” the accusations which he calls “not moral”: 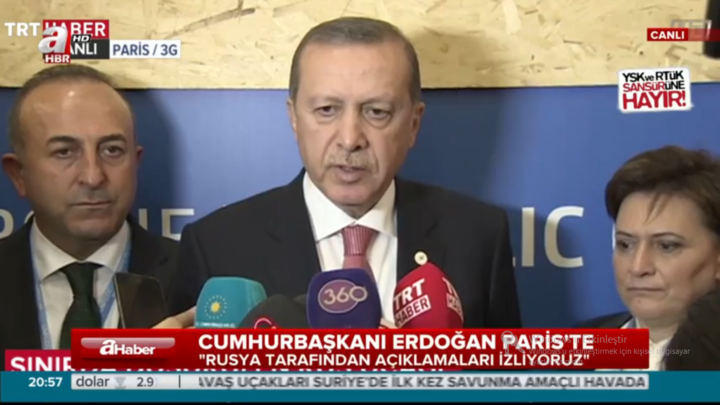 LATEST – Erdo?an: Russia’s claim that Turkey bought oil from Daesh is not ‘moral’, such claims have to be proved pic.twitter.com/PZka8MwzpL

Hilariously, the man who just finished starting a civil war just so he could regain a few lost seats in Parliament and who would just as soon throw you in jail as look at you if he thinks you might be a threat to his government, now says he will resign if Putin (or anyone else) can present “proof”: “We are not that dishonest as to buy oil from terrorists. If it is proven that we have, in fact, done so, I will leave office. If there is any evidence, let them present it, we’ll consider [it].”

Hold your breath on that.

And so, the Turkey connection has been exposed and in dramatic fashion. Unfortunately for Ankara, Erdogan can’t arrest Vladimir Putin like he can award winning journalists and honest police officers who, like Moscow, want to see the flow of money and weapons to Sunni militants in Syria cut off.

The real question is how NATO will react now that Turkey is quickly becoming a liability. Furthermore, you can be sure that the US, Saudi Arabia, and Qatar (who are all heavily invested in the Sunni extremist cause in Syria), are getting nervous. No one wants to see this blown wide open as that would mean the Western public getting wise to the fact that it is indeed anti-ISIS coalition governments that are funding and arming not only ISIS, but also al-Nusra and every other rebel group fighting to wrest control of the country from Assad. Worse, if it gets out that the reason the US has refrained from bombing ISIS oil trucks until now is due to the fact that Ankara and Washington had an understanding when it comes to the flow of illicit crude to Cehyan, the American public may just insist on indicting “some folks.”

Remember, when it comes to criminal conspiracies, the guy who gets caught first usually ends up getting cut loose. It will be interesing to see if Erdogan starts to get the cold shoulder from Ankara’s “allies” going forward.