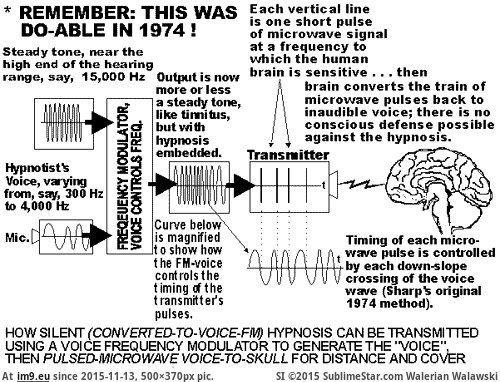 Directed energy weapons include lasers, high power microwave, and millimeter wave ones among others. A relevant December 2007 Department of Defense (DOD) report called them a “transformational game changer in military operations, able to augment and improve operational capabilities in many areas,” for both lethal and non-lethal purposes.

Among other applications, EMF weapons/devices are used for harassment, surveillance and mind control. Agencies like the Pentagon, CIA and NSA use them to monitor people, manipulate their minds, harm, and at times kill them. The Navy Times called them the “most feared and controversial weapon(s) of (the) modern age.”

Human experiments in America go back decades, an earlier article addressed MK-ULTRA (and others), accessed through the following link:

Begun in 1953, it was the code name for a secret CIA mind control program to perfect a truth drug. It followed earlier WW II hypnosis, primitive drugs research, and the US Navy’s Project Chatter, identifying and testing drugs on both animal and human subjects. These and other experiments aimed to control human behavior through psychedelic and halluncinogenic drugs, electroshock, radiation, graphology, paramilitary techniques, and various psychological/sociological/anthropological methods, among others. 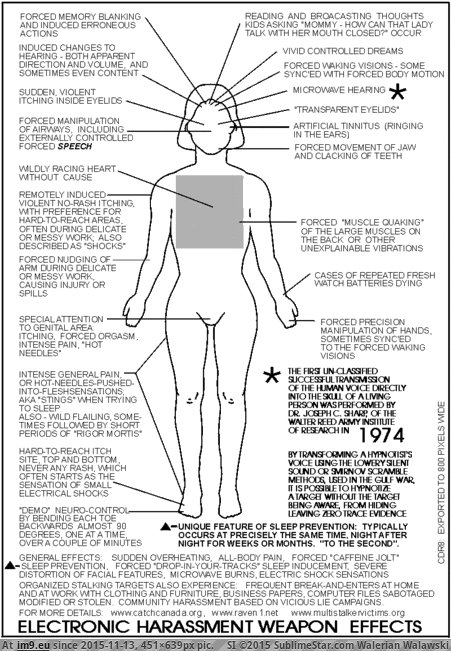 They comprised a vast open-field of mind experimentation, using anything that might work, legal or not on willing and unwitting subjects. For example, Dr. Ross Adey worked on the CIA’s Pandora Project, using microwaves to send signals to human brains. Cataloguing the results, he showed how they affected emotional and pathological states. He also learned that human brains could be controlled remotely through extremely low frequency modulated microwave beams, able to cause psychological and physical harm.

People could be turned in zombies, their minds easily controlled. Physical harm also resulted, affecting their blood, cardiovascular system, cells, central nervous and digestive systems, glands, metabolism, reproduction, eyesight, and hearing. In addition, subjects could be made suicidal or driven mad. Moreover, sounds and speech can be placed in victims’ brains, actual voices they can’t control or stop.

Other effects include unexplainable burning, itching, tickling or pressure; “humming” or “buzzing” causing sleeplessness and anxiety; loss of body control, producing sudden twitching or jerking of an arm or leg; and feelings of dread, rage, lust, sorrow, or other emotions that come and go quickly.

Moreover, microwave cooking can heat people to death by increasing the radiation field intensity, causing local hot spots in eyes, gall bladders, and other body parts. Paralysis can also be induced. Memories are erased or impaired. Cancerous cells can be produced, and behavior modified the way authorities wish, even turning people into killers, microwave signals directing them. The entire mobile phone network can be used for these purposes, yet people are unaware of what’s happening.

Post-WW II, human radiation experiments were conducted, affecting thousands of US citizens. Millions more were exposed to radioactive fallout from over 200 atmospheric and underground tests. At the Nevada site in the 1950s and 1960s, detonations affected over 200,000 ‘”atomic vets,” thousands more downwind also in Nevada, Utah, Colorado and New Mexico. These and numerous other physical and psychological experiments caused enormous harm to hundreds of thousands of unwitting people, victimized by their own country.

The types of electronic harassment technologies in use vary from those used by local gangs to those used by international organizations (Organized Crime, Private Companies, & Secret Societies. The electronic harassment technologies used by international organizations may involve the use of directed energy technologies such as lasers, raido frequency energy beams, holography, interferometry, electromagnetic radiation, radio waves, sound waves, satellites, radar, miniature electronic robots and smart dust etc. In general the technologies use directed energies which can not be seen by normal vision and which can travel over thousands of miles.

Since directed energy beams may be used like fiber optic cables to direct media, radiation, and electromagnetic energy at a human object, then the victims may experience hearing sounds, seeing images, & feeling heat stress. Since certain parts of the body can not reduce heat stress well, such as the eyes and the genitals, victims of an electromagnetic harassment often feel heat stress in the eyes which cause vision problems. Lasers may direct synthetic telepathic images, holographic images, and virtual reality simulations at a human object which can be used to control dreams, thoughts, and emotions. Also, subliminal messages may be directed at a human object by lasers. Directed energy beams can be used to direct radiation at certain frequencies and energies at a victim to control basic instincts and biological functions. Directed energy beams can cause seizures, muscle spasms, controlled muscle movements, sleep deprivation, radiation burns, & laser cuts. Sometimes the victims of electromagnetic harassment are targeted by international organizations to control their spiritual, psychic, & interdimensional abilities such as dreaming and energy manipulation. 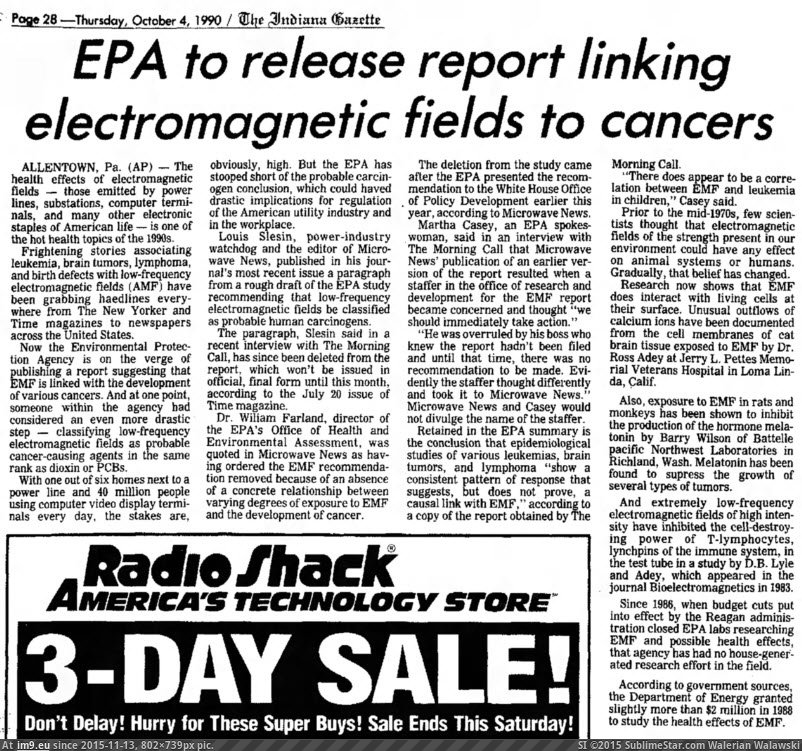