London (AFP) – A Scottish university on Wednesday revoked an honorary degree it awarded to Donald Trump amid an outcry over a call by the Republican presidential frontrunner to bar Muslims from entering the United States.

“In the course of the current US election campaign, Mr Trump has made a number of statements that are wholly incompatible with the ethos and values of the university,” said a spokesman for Robert Gordon University in a statement.

“The university has therefore decided to revoke its award of the honorary degree.”

The university, based in the northern Scottish city of Aberdeen, awarded Trump an honorary doctorate of business administration in October 2010…. http://news.yahoo.com

Petition to ban Trump from the UK gets more than 100k signatures, will be considered by Parliament 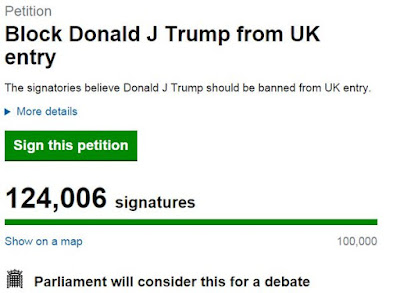 Donald Trump wants to shut down the Internet in America

It is well known that the US Presidential candidate, Donald Trump makes controversial statements but this one takes that cake. Trump want the US authorities to consider “closing the Internet up in some way” to fight Islamic State terrorists in cyberspace.

Trump made this controversial statement only hours after another ‘trumpian gem’ suggesting United States should ban Muslims from entering United States. Trump mocked anyone who would object that his plan might violate the freedom of speech, saying “these are foolish people, we have a lot of foolish people.”

He seems to have faith in Microsoft CEO, Bill Gates in his mission of closing the Internet. “We have to go see Bill Gates,” Trump said, to better understand the Internet and then possibly “close it up.” …. http://www.techworm.net