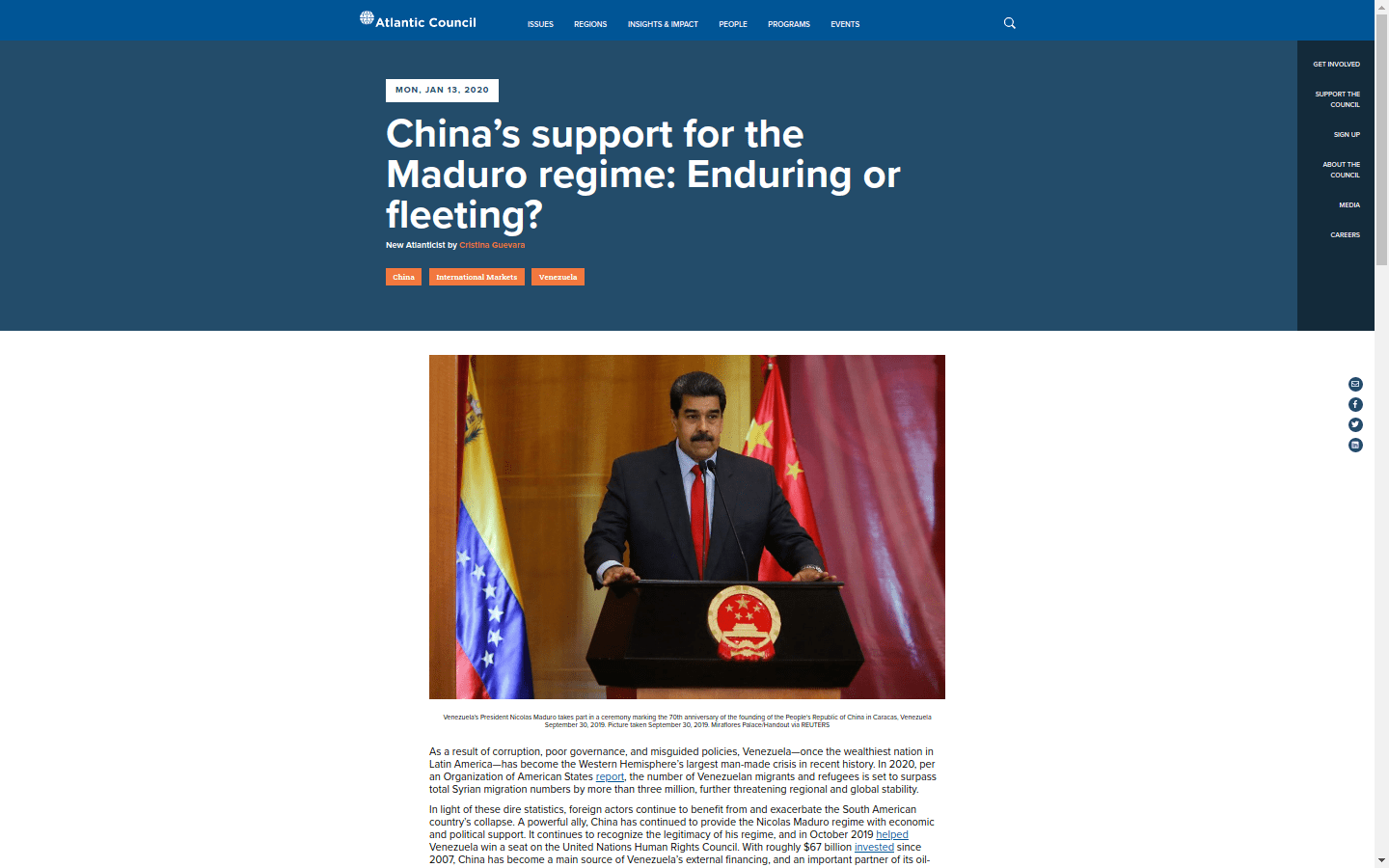 Does War with China starts in Venezuela?

Trump has indicted Maduro from Venezuela and there are a ton of reasons the Trump administration has decided to end the regime. Maduro basically sold out to China and essentially gave them a foothold in South America.

Maduro has defaulted on loans from China and the CCP would most certainly like nothing else but to move in and set up shop, further solidifying their influence on the worldwide stage and also give them even more power in the region.

A great article listed below breaks down the intricacies of the Maduro and China connection. The Trump administration knows this a shot across the bow and they’re willing to take it.

“Chinese President Xi Jinping’s support for Maduro reflects Beijing’s fear that a violation of sovereignty in Venezuela will lead to the international community’s meddling with Chinese internal affairs, specifically in relation to Taiwan and Hong Kong. Indeed, China’s long-standing noninterference approach to foreign policy is the driving force behind its reluctance to join public calls for political change in Venezuela. Furthermore, as long as China perceives US presence in the Asia Pacific region—including military bases in Guam, Japan, and South Korea, and political support for Taiwan and Hong Kong—as a threat, it has no incentives of siding with the US-backed opposition leader Juan Guaidó.”

From 2007 to 2017, Beijing provided more than $60 billion in financing to Venezuela, representing more than 40 percent of total Chinese lending in Latin America. China signed multiple contracts with Venezuela for development projects, including mining research and exploration, housing projects, communication satellites, and a railway company.

China’s support for the Maduro regime: Enduring or fleeting?

As a result of corruption, poor governance, and misguided policies, Venezuela—once the wealthiest nation in Latin America—has become the Western Hemisphere’s largest man-made crisis in recent history. In 2020, per an Organization of American States report, the number of Venezuelan migrants and refugees is set to surpass total Syrian migration numbers by more than three million, further threatening regional and global stability. More here:

China’s support for the Maduro regime: Enduring or fleeting?

Kyle Bass sits down with infamous Chinese businessman Guo Wengui, also known as known as “Miles Kwok,” to hear a series of shocking accusations and predictions revolving around the Chinese government. Kwok provides his perception of the backstory behind several recent high-profile news items, and touches on the Chinese government’s management of the economy. He also unfurls an alarming forecast about Alibaba co-founder Jack Ma. Filmed on October 5, 2018 at an undisclosed location.