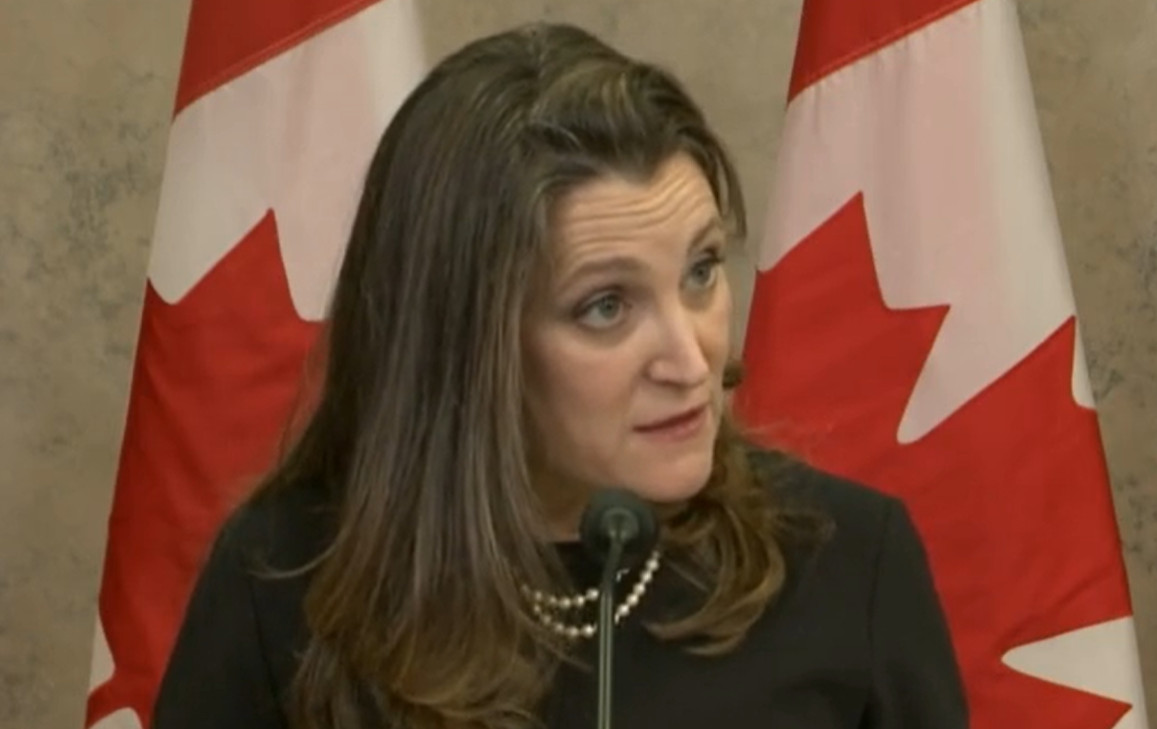 (LifeSiteNews) – Documents recently shared by Rebel News show that in December 2020 then-Minister of Global Affairs Chrystia Freeland described Canada’s plan to use COVID-19 as leverage to adhere to the goals of the World Economic Forum (WEF).

Briefing notes for Freeland that Rebel News obtained through “Access to Information” filings were provided to Freeland upon her invitation to serve as co-chair of “the fourth meeting of the Global Action Group on the Post COVID-19 World” hosted by the WEF.

The “Run of Show” notes section made clear the meeting was “intended to finalize and agree upon a set of principles for global cooperation created by the WEF.” Freeland was asked to “lead the conversation” on the first of these principles, which was to “strengthen global cooperation.”

While recovery from the COVID-19 pandemic was indicated to be one of the goals of such a global partnership, the document indicates that COVID recovery was considered not just an end in itself but a means toward the WEF’s long-held aims of a more equitable and sustainable world.

Thus, one of the three objectives listed for the meeting was to “Reiterate Canada’s commitment to effective and accountable multilateralism” — that is, an alliance of countries to pursue a common goal — “including as a core element of our collective efforts to combat COVID-19,” that is, not exclusively as a way of fighting COVID-19.

In addition to describing how the meeting attendees, who represented various countries such as Japan, the Netherlands and South Africa, could “collectively” work to align with the WEF’s principles for global cooperation, the briefing notes suggested that Canada would conform with those principles. This is also implicitly suggested by the fact that Freeland, serving as a top Canadian official (now as Deputy Prime Minister), embraces enough of the WEF goals outlined therein to lead a discussion on them at the December 2020 meeting.

As one example of Canada’s adoption of WEF principles, the document states that “Canada views the 2030 Agenda as a comprehensive framework for responding to and recovering from the COVID-19 pandemic, and building more resilient, inclusive, and sustainable societies that can help to prevent and better withstand future crises and shocks.”

The 2030 Agenda is the United Nations’s (UN) “sustainable development” plan, which involves 17 Sustainable Developments Goals (SDGs) and 169 sub-targets that United Nations member states aim to achieve by 2030. These goals include, for example, ensuring “sustainable consumption and production patterns,” taking “urgent action to combat climate change,” and reducing inequality within and among [emphasis mine] countries.”

The 2030 Agenda is a major key to understanding the meaning of the otherwise-vague points of Freeland’s briefing notes, since it concretely describes the meaning of WEF goals such as “sustainability” and “equity” in a way the rest of the document does not — it instead outlines general concepts that can be interpreted in an immense variety of ways.

It is notable that the sustainable development goals of Agenda 2030, embraced by the WEF in its “Great Reset” plans and alluded to in Freeland’s WEF notes, were adopted in 2015.

The UN’s sustainable development goals and their targets also provide context for assertion that the document “hint[s] at a desire to use COVID instability to restructure society, cancel oil and gas development, and censor the internet.”

For example, Target 12.c of Agenda 2030 demands that nations “Rationalize inefficient fossil-fuel subsidies that encourage wasteful consumption by removing market distortions … including by restructuring taxation and phasing out those harmful subsidies, where they exist, to reflect their environmental impacts … ”

In fact, Canada has already acted to conform with this goal through a radical “climate plan” showcased by Prime Minister Trudeau in 2021. The plan would ban the sale of new gas-powered vehicles from 2035 onward and subsidize at a heavy taxpayer expense electric cars, which some studies have shown are worse polluters than those that run on gasoline.

The document also states that “The response to COVID-19 must not, therefore, be allowed to reproduce or perpetuate existing social norms that fuel inequalities and social unrest. This applies to the online sphere … ” Such a statement can be interpreted as referring to inflammatory comments on social media, which has already widely prompted calls for as well as already-enforced censorship, as Rebel News suggests.

Multiple prominent Canadian political figures, including Conservative Party leadership candidate Pierre Poilievre, have raised concerns about the ties Liberal Party Cabinet members, including Freeland, have to the WEF, and what these ties mean for the future of the country.

“ … the World Economic Forum, which the finance minister [Freeland] joins, which says that in 2030 … “You will own nothing and you will love it … That is the agenda of these people,” Poilievre said.

“Maybe that’s why over the last year they have done everything in their power to make housing completely unaffordable, so nobody can afford it except them … ” Poilievre added in his statement.

In an op-ed for the mainstream National Post, economic and international relations expert Rupa Subramanya wrote that “Chrystia Freeland’s side gig with the WEF is endangering Canadian democracy,” adding, “There’s no need to invent conspiracy theories. The attempt by global elites to subvert local democracy is fully on and in plain view.”