Justice Samuel Alito had a straightforward question, but the lawyer arguing on behalf of the petitioners in Obergefell v. Hodges did not have a coherent answer. 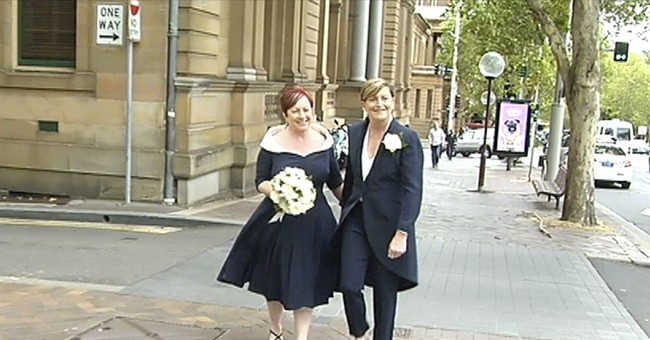 Her central argument in the case: The 14th Amendment’s command that the states shall not “deprive any person of life, liberty, or property, without due process of law; nor deny to any person within its jurisdiction the equal protection of the laws” protected a “right” for people of the same sex to marry each other.

Alito did not buy it.

“Suppose we rule in your favor in this case and then after that, a group consisting of two men and two women apply for a marriage license,” Alito said.

“Would there be any ground for denying them a license?” he asked.

“I believe so, Your Honor,” said the lawyer.

“What would be the reason?” Alito asked.

“There’d be two,” she said. “One is whether the state would even say that that is such a thing as a marriage, but then beyond that, there are definitely going to be concerns about coercion and consent and disrupting family relationships when you start talking about multiple persons.”

To this, Justice Antonin Scalia responded succinctly, “Well, I didn’t understand your answer.”

The court ended up ruling 5-to-4 that the 14th Amendment did create a right to same-sex marriage. The dissenters included Scalia, Alito, Justice Clarence Thomas and Chief Justice John Roberts.

In a dissent joined by Thomas, Scalia explained why the 14th Amendment did not create a right to same-sex marriage.

“When the Fourteenth Amendment was ratified in 1868, every state limited marriage to one man and one woman, and no one doubted the constitutionality of doing so,” Scalia wrote.

“That resolves these cases,” he said.

Nonetheless, he was on the losing side in Obergefell because Justice Anthony Kennedy, who President Ronald Reagan nominated in 1987, joined with Justices Ruth Bader Ginsburg, Stephen Breyer, Sonia Sotomayor and Elena Kagan in ruling that the 14th Amendment did protect a right for two people of the same sex to marry.

Kennedy, in fact, wrote the majority opinion. It was a study in incoherence.

“It cannot be denied that this court’s cases describing a right to marry presumed a relationship involving opposite-sex partners,” Kennedy conceded.

“In defining the right to marry these cases have identified essential attributes of that right based on history, tradition, and other constitutional liberties inherent in this intimate bond,” Kennedy said.

“This analysis compels the conclusion that same-sex couples may exercise the right to marry,” he concluded.

In explaining his pro-same-sex marriage conclusion, Kennedy went on to say that one “basis for protecting the right to marry is that it safeguards children and families and thus draws meaning from related rights of childbearing, procreation, and education.”

In a dissent joined by Scalia, Thomas pointed directly to the threat the court’s decision posed to religious liberty.

“In our society, marriage is not simply a governmental institution; it is a religious institution as well,” wrote Thomas. “Today’s decision might change the former, but it cannot change the latter. It appears all but inevitable that the two will come into conflict, particularly as individuals and churches are confronted with demands to participate in and endorse civil marriages between same-sex couples.”

“Had the majority allowed the definition of marriage to be left to the political process — as the Constitution requires — the people could have considered the religious liberty implications of deviating from the traditional definition as part of their deliberative process,” wrote Thomas.

“Instead,” he said, “the majority’s decision short-circuits that process, with potentially ruinous consequences for religious liberty.”

“Today’s decision usurps the constitutional right of the people to decide whether to keep or alter the traditional understanding of marriage,” he wrote in an opinion joined by Scalia and Thomas. “It will be used to vilify Americans who are unwilling to assent to the new orthodoxy.”

This week, the Supreme Court declined to take up Davis v. Ermold. Lawyers representing Kim Davis, a former county clerk in Kentucky, explained this case in their petition to the court.

“Respondents claim that Davis violated their right to marry when she raised a conscientious objection, according to her deeply held religious beliefs, to issuing marriage licenses to same-sex couples under her name and authority,” it said. “In the context of this case, however, and under well-established precedent, Davis is entitled to qualified immunity from respondents’ claims against her in her individual capacity.”

Davis’ conscientious objection did not prevent same-sex couples from getting licenses in Kentucky. “Kentucky law,” the petition noted, “allows applicants to seek a Kentucky marriage license, which is effective throughout the state, in any county.”

Alito joined Thomas in issuing a statement, indicating their agreement in the decision not to hear the Davis case — but challenging the precedent of Obergefell.

“This petition implicates important questions about the scope of our decision in Obergefell, but it does not cleanly present them,” wrote Thomas.

“As a result of this court’s alteration of the Constitution, Davis found herself faced with a choice between her religious beliefs and her job,” he said.

“Davis may have been one of the first victims of this Court’s cavalier treatment of religion in its Obergefell decision,” he said, “but she will not be the last.”

Terence P. Jeffrey is the editor in chief of CNSnews.com.