According to Dr. Boian Alexandrov at the Center for Nonlinear Studies at Los Alamos National Laboratory in New Mexico, terahertz (THz) waves destroy human DNA. The waves literally unzip the helix strand. Now a team of technologists at UT Dallas are planning to take chips broadcasting THz waves and embed them into mobile phones for use as an imaging system for consumers, law enforcement and medical personnel… a potentially deadly technology that could eventually kill or sicken millions of people.

The controversial THz scanner technology used by the TSA at many of the nation’s airports is being adapted for cell phone use. Studies of terahertz radiation have caused experts to raise alarms over the significant health risks to humans.

Recently major media touted a new chip that permits the adaption of a THz generating device to be embedded into cellular phones. 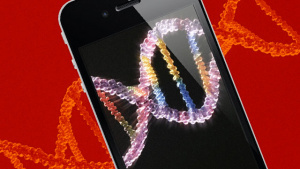 Is the price for seeing through walls, a grisly death?

The excited press painted grand pictures of such technology being used by consumers to see through walls and objects, while health professionals like physcians might incorporate the technology to seek out small tumors inside patients without the need for invasive surgery.

In a breakthrough study conducted by Dr. Boian Alexandrov at the Center for Nonlinear Studies at Los Alamos National Laboratory in New Mexico and a team of physicists, they discovered terrifying evidence that exposure to THz radiation builds cumulatively and affects human and animal tissue DNA. In essence, it tends to unzip the DNA molecule.

The Los Alamos scientists paper, DNA Breathing Dynamics in the Presence of a Terahertz Field reveals very disturbing—even shocking—evidence that THz radiation significantly damages the DNA of the people being directed through airport scanners and all TSA workers in close proximity to the machines.

Their synopsis: “We consider the influence of a terahertz field on the breathing dynamics of double-stranded DNA. We model the spontaneous formation of spatially localized openings of a damped and driven DNA chain, and find that linear instabilities lead to dynamic dimerization, while true local strand separations require a threshold amplitude mechanism. Based on our results we argue that a specific terahertz radiation exposure may significantly affect the natural dynamics of DNA, and thereby influence intricate molecular processes involved in gene expression and DNA replication.“

What all that means is the resonant effects of the THz waves bombarding humans unzips the double-stranded DNA molecule. This ripping apart of the twisted chain of DNA creates bubbles between the genes that can interfere with the processes of life itself: normal DNA replication and critical gene expression.

Likely to cause cancer

David J. Brenner, a Columbia University doctor and expert on the effects of radiation stated that it’s quite likely the TSA scanners will cause cancer in some individuals.