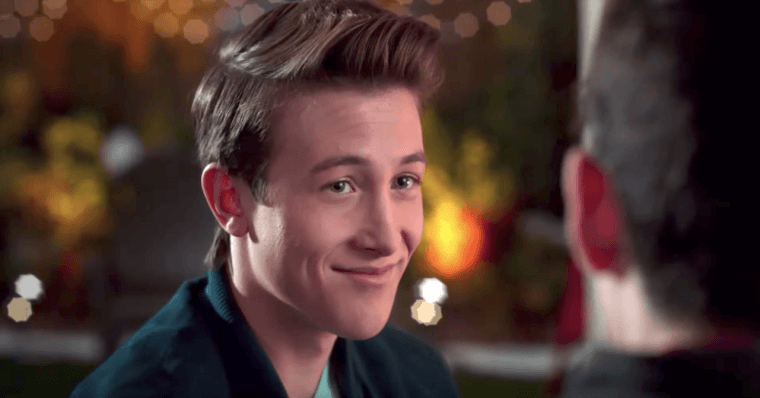 The season three finale of the series, which aired July 26, concluded with the scene between Cyrus Goodman (played by Joshua Rush) confessing his attraction to his classmate TJ Kippen (Luke Mullen).

“Is there anything else you want to tell me?” Cyrus asks TJ, to which he replies, “Yeah.” Cyrus then reaches out and holds TJ’s hand.

The homosexual declaration was made in the episode along with another scene in which the pair sang along to Lady Gaga’s LGBT anthem “Born This Way.”

In 2017, Disney announced that the show’s second season would begin showing Cyrus Goodman’s “self discovery” path.

The series was not renewed for a fourth season.

While this was Disney’s first depiction of a teen same-sex relationship, the first same-sex adult couple in a Disney show for kids occurred in 2014 on “Good Luck Charlie.”

“This scene is going to be so important for so many kids growing up watching this right now. They’ll get to look back at this and think, this show let me know that I would be okay,” a viral Tweet by @tyrusmcu stated and was retweeted more than 30,000 times.

Actor Luke Mullen also took to Twitter to talk about the controversial scene and his time on the show.

“Honored to be a part of such a groundbreaking show. I hope my character can inspire people to proud of who they are and love who they love,” Mullen wrote to his almost 20 thousand followers.

The multinational mass media and entertainment company has been slowly adopting and promoting LGBT views, as seen on its television shows and movies such as “Beauty and the Beast,” and “Doc McStuffins” in 2018. In 2017, “Star vs. the Forces of Evil” introduced the company’s first male princess on the same show that previously drew controversy for featuring the first same-sex kisses.

Disney is following in the footsteps of many other family-based companies.

In May, the kid show “Arthur” on PBS, which receives government funding, depicted a same-sex wedding.

Last year, the popular Macy’s Thanksgiving parade, which has also been known for its wholesome celebrations, made headlines for its first controversial public display of same-sex relations.

Conservative groups, such as the American Family Association, have warned that Disney’s support for an activist LGBT agenda is immoral and promotes sinful behaviors.