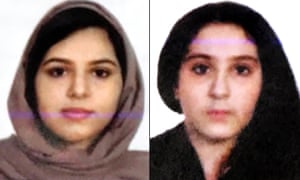 Bodies of Rotana Farea and Tala Farea were found taped together, lying on rocks along the river last October

The tragic and mysterious death of two Saudi Arabian sisters whose bodies were found, taped together, along New York City’s waterfront last October appears to have been a double suicide.

Rotana and Tala Farea both drowned and the cause of death was suicide, New York medical examiner Barbara Sampson said in a brief report on Tuesday evening.

Rotana, 23, and Tala, 16, were found dead in the city around a year after they had ceased living with family members in Fairfax, Virginia. It later emerged there were reports they were victims of alleged abuse, although details have not emerged. They had been seeking asylum in the United States.

“Today, my office determined that the death of the Farea sisters was the result of suicide, in which the young women bound themselves together before descending into the Hudson River,” Sampson said in a short but poignant note released on Tuesday.

The river runs down the west side of Manhattan.

More at Source: Deaths of Saudi sisters found bound together in New York river ruled suicide | US news | The Guardian