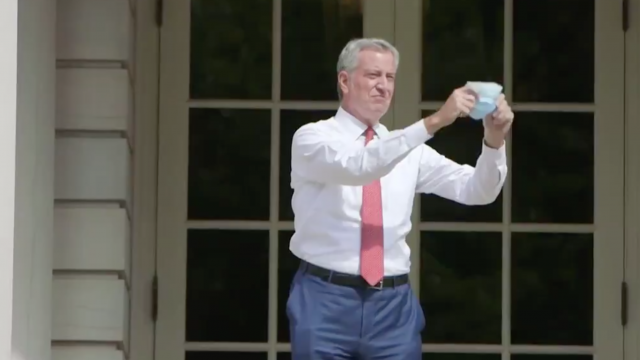 Mayor Bill De Blasio’s office may have released the dumbest video of 2020. And that’s saying something.

In fact, the NYC mayor’s ridiculous new PSA encouraging people to wear face diapers might even be funnier than those videos of idiotic protesters getting hit with dumpsters and lighting themselves on fire with their own Molotov cocktails.

In a short clip apparently meant to inspire mask-wearing solidarity, but instead inadvertently capturing all the illogic and insanity of this horrible year, de Blasio – who, you’ll recall, was encouraging people to go out and about in the early days of the pandemic, and who couldn’t seem to stay away from his gym even after everyone else was told to stay home – flamboyantly steps out onto the steps of the New York City Hall, dramatically slaps on a face mask, and salutes the crowd of absolutely no one standing in the square.

If that weren’t stupid enough, the entire thing is set to overly dramatic music.

In New York City we wear our masks, proudly. pic.twitter.com/YTZDGu2pzG