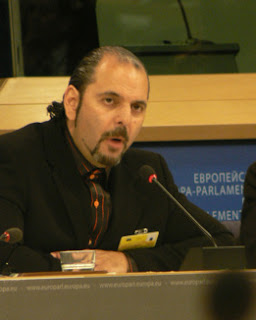 Thursday afternoon, around mid-day, Daniel Estulin arrives at Madrid airport in time for his flight to Ireland to accompany Ian R. Crane on his “Beyond Treason”  tour to expose the Irish Bilderbergers and other globalists. On arrival at the airport, Daniel was taken into custody by Spanish police. After a time, he was informed that the “reason” he was detained was because the authorities  believed he may be in possession of a fake passport.

After some questioning and quizzing, which established that his passport was indeed genuine, he was released, but was told he cannot leave the country and certainly cannot travel to Ireland on account of the fact Queen Elizabeth was on her state visit to the country. The authorites, of course, retained Daniel’s passport so as to prevent him leaving the country for that period of time.