“If someone really has such ideas, then this someone should think long & hard about the possible consequences of such plans.”

Russian Foreign Minister Sergey Lavrov on Tuesday lashed out at what he described as threats coming out of the US to assassinate President Vladimir Putin, apparently in response to a slew of anonymously sourced reports.

“There are some ‘anonymous officials’ from the Pentagon who have actually enunciated threats to deliver a ‘decapitating strike’ on the Kremlin, which is in fact an assassination threat against the Russian president,” Lavrov said, according to TASS. 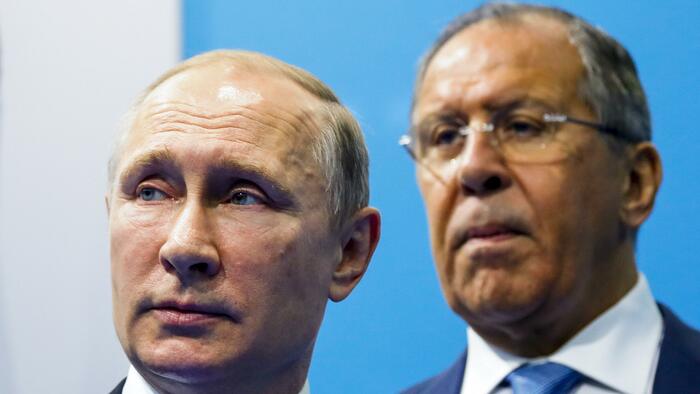 “If someone really has such ideas, then this someone should think long and hard about the possible consequences of such plans,” the top Russian diplomat warned.

The condemnation also came less than a week after Senator Lindsey Graham called for someone to “take out” the Russian president for the war in Ukraine to end.

But it appears Lavrov specifically had in mind a September report published in Newsweek which relied on anonymous US defense officials describing that the Biden administration was mulling plans for a “decapitation strike to kill Putin in the heart of the Kremlin.”

Below is the relevant section from that September 29 Newsweek article:

Details about what “decisively” means have not been publicly revealed. The military sources tell Newsweek that there are subtle moves being made with regard to nuclear threats, including moving submarines and aircraft and drilling B-52 bombers. But they stress that non-nuclear military options—the use of conventional weapons and special operations, as well as cyber and space attack—are front and center, to include a decapitation strike to kill Putin in the heart of the Kremlin.

Continuing his Tuesday response to this and more recent threats emanating from the West, Lavrov said that “It seems that they have shed all vestiges of respectability.”

He added: “The notorious [ex-British PM] Liz Truss is a vivid example given that she directly and publicly said during her pre-election campaign that she was ready to order a nuclear strike,” he recalled.

💬 FM #Lavrov: The Western policy of total containment of Russia is extremely dangerous. It can eventually escalate into a direct armed confrontation between nuclear powers.

❗️ We continue to repeat time and again that a nuclear war cannot be won and must never be fought. pic.twitter.com/hauDXNppI0

Lavrov also addressed a growing atmosphere of dangerous nuclear rhetoric and confrontation. “It is no secret to anyone that the strategic goal of the United States and its NATO allies is to defeat Russia on the battlefield as a mechanism for significantly weakening or even destroying our country,” he said.

Related to this, he explained further, “[Ukrainian President] Vladimir Zelensky had gone as far as urging NATO states to deliver preventive nuclear strikes against Russia. This crosses the line of what is acceptable. However, we heard far worse statements from figures within the [Kiev] regime.” He said all of this was part of a US-NATO plan to weaken and divide Russia.

Why do you hate Ivermectin? Who told you it was bad? According to the W.H.O. Remdesivir increases your risk of Kidney Failure 20 fold.

“This FBI has to go’ | Rep. Claudia Tenney

Gucci Heiress EXPOSES Her Family and The Fashion Industry – VIDEO

WHAT? | THERMONUCLEAR BAD 10% of Earth’s population likely infected over next 90 days.

House Republicans Warn: Subpoenas Will Fly To The FBI Over ‘Twitter Files’