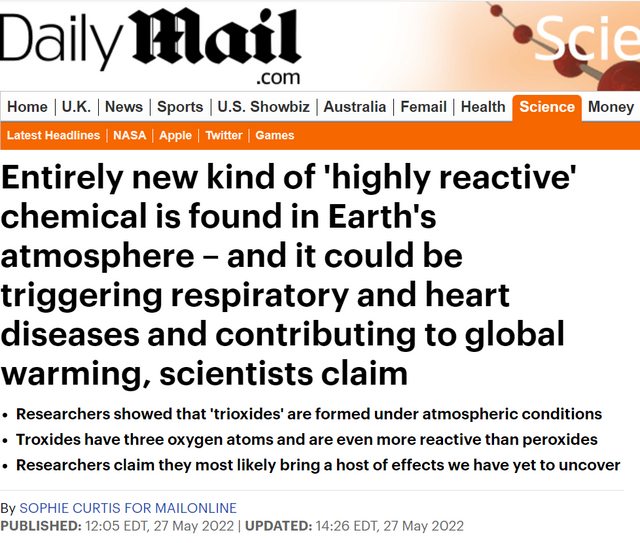 Anything to deflect from population control via vaccines…

Entirely new kind of ‘highly reactive’ chemical is found in Earth’s atmosphere – and it could be triggering respiratory and heart diseases and contributing to global warming, scientists claim
Researchers showed that ‘trioxides’ are formed under atmospheric conditions
Troxides have three oxygen atoms and are even more reactive than peroxides
Researchers claim they most likely bring a host of effects we have yet to uncover

Scientists have detected a new type of extremely reactive substance in the Earth’s atmosphere that could pose a threat to human health, as well as the global climate.

Researchers from the University of Copenhagen have demonstrated that trioxides – chemical compounds with three oxygen atoms attached to each other – are formed under atmospheric conditions.

Trioxides are even more reactive than peroxides – which have two oxygen atoms attached to each other, making them highly reactive and often flammable and explosive.

Peroxides are known to exist in the air surrounding us, and it was predicted that trioxides were probably in the atmosphere as well, but until now it has never been unequivocally proven.

‘This is what we have now accomplished,’ says Professor Henrik Grum Kjærgaard, at the University of Copenhagen’s Department of Chemistry.

‘The type of compounds we discovered are unique in their structure. And, because they are extremely oxidising, they most likely bring a host of effects that we have yet to uncover.’ Source