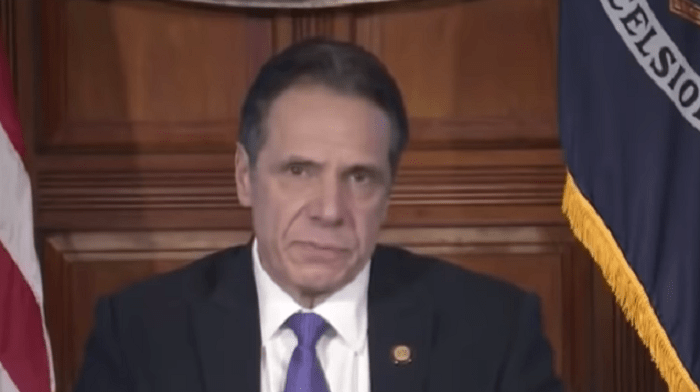 Lawmakers on both sides of the aisle have accused the Cuomo administration of engaging in a ‘criminal conspiracy’ following a bombshell report alleging they stripped data on nursing home deaths from a public report.

Lawmakers on both sides of the aisle have accused the Cuomo administration of engaging in a ‘criminal conspiracy’ following a bombshell report alleging they stripped data on nursing home deaths from a public report.

The Wall Street Journal published a report Thursday night indicating advisers to the New York Governor had engaged in a cover-up.

“Cuomo’s top advisers successfully pushed state health officials to strip a public report of data showing that more nursing-home residents had died of Covid-19 than the administration had acknowledged,” they detailed.

The Journal cites their sources as “people with knowledge of the report’s production.”

The New York Times reported in January that attorney general Letitia James, a Democrat, accused Cuomo and his administration, particularly officials at the State Health Department, of undercounting COVID deaths at nursing homes by as much as 50%.

The public report, submitted in July, stated only 6,432 nursing-home residents had died from COVID.

What advisers purportedly had stripped were the number of people who were transported to hospitals and died after having contracted the infection at a nursing home.

“The initial version of the report said nearly 10,000 nursing-home residents had died in New York by July last year,” according to the Journal.

Did the Cuomo Admin Engage in Criminal Behavior?

Secretary to the Governor, Melissa DeRosa, all but admitted to the stalling and hiding of nursing home data related to COVID deaths in a conference call with Democrat lawmakers last month.

The New York Post revealed that DeRosa told leading Democrats that they did so because the administration feared the data could “be used against us” by the Justice Department saying, “basically, we froze.”

Why would the governor and his aides go through such painstaking and possibly illegal lengths to strip data from a report on COVID-related deaths in nursing homes?

Cuomo himself famously issued an executive order in March forcing those nursing homes to take on patients that had tested positive for coronavirus.

Any deaths of seniors in nursing homes or generating from within, as a result, would have reflected poorly on the Democrat governor.

Democrats and Republicans Are Calling It What It Is – Criminal

“It’s very clear the Cuomo admin understood their March 25th order had contributed to the death toll [and] they wanted to cover it up to avoid political fallout, plain and simple,” he tweeted.

“They had the data [and] they hid it,” Lawler added. “This was a coordinated criminal conspiracy to obstruct justice.”

Rensselaer County Executive Steve McLaughlin described Cuomo as “an evil, sociopath Governor” and suggested the Democrat’s former top aide, Joe Percoco, currently in prison for accepting over $300,000 in bribes, should make room “for a cellmate.”

NY: you have an evil, sociopath Governor surrounded by evil sociopath underlings. They have lectured to you, dictated to you, and lied to you for 10 years, & they killed over 15,000 seniors in nursing homes.
Why? Why are you listening to anything they say or any orders they give? pic.twitter.com/xCtfZmNnfj

But it wasn’t just Republicans who were labeling the Cuomo administration’s actions as criminal.

Democratic State Assemblyman Ron Kim, who has accused the governor of threatening to ruin his career if he didn’t issue a statement covering for DeRosa’s cover-up admission, came to the same conclusion.

“This is criminal,” he tweeted. “The Gov’s top advisors pushed state health officials to strip a public report of the data showing more nursing home deaths.”

Kim added, “The changes Cuomo’s aides made to the report reveal that they had the fuller accounting of [nursing home] deaths as early as the summer of 2020.”

The changes Cuomo’s aides made to the report reveal that they had the fuller accounting of NH deaths as early as the summer of 2020. https://t.co/OxR9TEcXCy

Fox News reports that two members of the Cuomo administration have fired back against the Wall Street Journal’s report.

Beth Garvey, a senior adviser to Cuomo, said the deaths that took place in hospitals were omitted from the July report because the New York Department of Health “could not confirm it had been adequately verified.”

That said, NBC News highlights the fact that New York, and New York alone, failed to take into account COVID victims who died in hospitals.

Cuomo earlier this week hired Elkan Abramowitz, a high-profile defense lawyer, who will represent the Executive Chamber in matters pertaining to the nursing home scandal.

The governor has also had mounting calls to resign over the last several days having been accused of multiple instances of sexual harassment.

Read more at the Political Insider