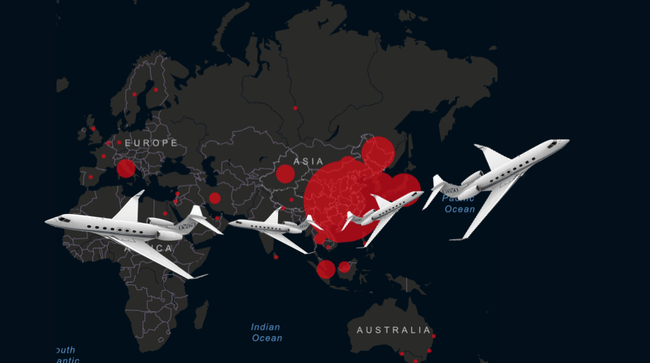 “A lot of people are taking a knee-jerk reaction and moving themselves out of harm’s way.”

The outbreak of Covid-19 is negatively impacting business aviation networks across South East Asia and the world. However, there’s a new emerging trend that says otherwise. Elites are dodging commercial flights to avoid large crowds. They have opted for private jets, reported the Financial Times, citing data from WingX, a firm that provides market data relating to business aviation flight activity.

While top airline carriers in Asia warn of a significant drop in year-on-year performance in the first half of 2020 amid the virus outbreak in China, South Korea, and Japan, the number of private jet flights between Hong Kong to Australia and North America soared in January by 214% compared with a year ago.

Private jet flights from Hong Kong to other regions around the world soared 34.2% in the month compared with last year.

The jump in private jet flights suggests a mass exodus of business elites and their and their families from China, Hong Kong, and surrounding areas, who are getting the hell out of a dodge as the virus outbreak worsens.

“Everyone quickly refers back to Sars. A lot of people are taking a knee-jerk reaction and moving themselves out of harm’s way,” Lowe said.

Adam Twidell, chief executive of PrivateFly, a UK-based private jet brokerage, said there had been a tremendous surge in requests from people wanting to fly private out of Asia.

It makes absolutely no sense why elites are bugging out of Asia in droves via private jets for “just the flu.” Or maybe it’s not the typical flu, as we explained here: Creator Of US BioWeapons Act Says Coronavirus Is Biological Warfare Weapon.

Even the New York Post is suggesting that the virus could “have leaked from a lab.”

ZeroHedge readers should know by now, there’s a large gap of virus information the mainstream media is failing to tell you about the incoming pandemic.

The moves elites are making today certainly suggest the outbreak is about to get worse.