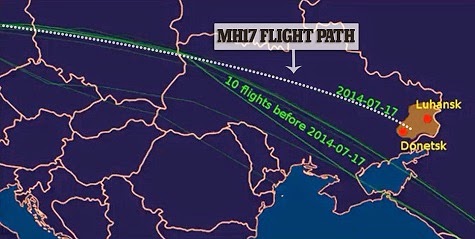 The crashed MH17 flight took a route 300 miles to the north of its usual path, an aviation expert has said.
Robert Mark, a commercial pilot who edits Aviation International News Safety magazine, said that most Malaysia Airlines flights from Amsterdam to Kuala Lumpur normally travelled along a route significantly further south than the plane which crashed.

Malaysia Airlines has insisted its plane travelled on an “approved route” used by many other carriers.

But Mr Mark said: “I can only tell you as a commercial pilot myself that if we had been routed that way, with what’s been going on in the Ukraine and the Russian border over the last few weeks and months, I would never have accepted that route…. http://www.telegraph.co.uk