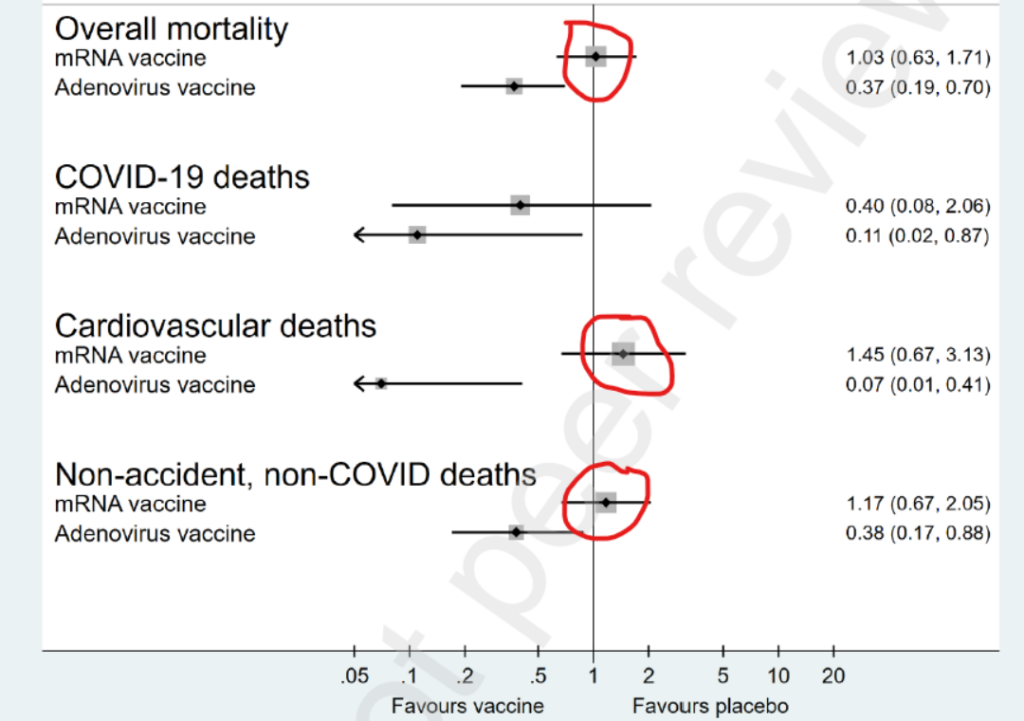 A preprint study in the Lancet has analysed the mortality data from the Covid vaccine trials and found that mRNA vaccines increase the risk of heart-related deaths by up to 50%. Source: The Daily Sceptic

A preprint study (not yet peer-reviewed) in the Lancet has analysed the mortality data from the vaccine trials and made the shocking finding that mRNA vaccines had “no effect on overall mortality”. Worse, it found the risk of non-Covid, non-accident mortality actually increased by 17% (relative risk 1.17, 95% confidence interval (CI) 0.67-2.05). Furthermore, a full 50% of the non-Covid deaths (27 out of 54) were cardiovascular and the relative risk of such death was 45% higher in the vaccine arm (relative risk 1.45, CI 0.67-3.13), breaking down to 50% higher for Pfizer and 40% higher for Moderna (with wide confidence intervals).

These are clearly alarming findings. But they go oddly unremarked upon in the paper. This is presumably due to the authors being wary of criticising the vaccines in order to be published. If so, it is disappointing that this is thought (probably correctly) to be necessary and indicates how absurdly political vaccine research has become. While the results are not, in this study, statistically significant, in that the confidence intervals are wide and include 1.0, the effect size is large and, in the context of wider concerns about adverse effects of mRNA vaccines on the cardiovascular system, warrant some comment, if only to flag them up and say larger studies are needed to see if statistical significance obtains.

The focus of the paper is instead on the surprising finding that the adenovirus-vector vaccines (e.g. AstraZeneca and J&J) appear significantly to reduce overall mortality. Most strikingly, there are zero cardiovascular deaths in the vaccine arm versus five in the placebo arm. The relative risk of non-accident, non-Covid death is 62% lower in the vaccine arm than the placebo arm (relative risk 0.38 CI 0.17-0.88). Overall mortality is 63% down.

It’s not clear to me how seriously the authors take the finding that adenovirus-vector vaccines cut overall mortality by nearly two thirds, or whether making the case for it is an elaborate way of sneaking the devastating data on mRNA vaccines past the censors. I’m certainly suspicious of any trial data for a Covid vaccine that imply it is unexpectedly a miracle cure for cardiovascular disease, and I would expect they discreetly are too.

The main conclusion of the paper is that, given the remarkable general healing properties of one type of vaccine but not the other, the overall impact of vaccines on mortality should be studied much more closely.

What isn’t spelt out, but is perhaps implied, is that the negative impact of mRNA vaccines on mortality – cardiovascular deaths in particular – warrants particular attention in this monitoring and evaluation.

While the conclusions are disappointingly muted, the introduction is more robust on the potential problems with the vaccines. It states:

There is now ample evidence that vaccines can have broad heterologous effects on the immune system. These effects can lead to additional protection or increasing susceptibility to unrelated infections or even other non-infectious immune mediated diseases. Therefore, as it has now been established in numerous studies, vaccines may have completely unexpected effects on overall mortality, different from what could be anticipated based on the protection against the vaccine-targeted disease. The current system for testing vaccines does not incorporate this possibility.

Let’s hope this paper makes it through peer-review and into the journal without being neutered further, and its recommendations for proper vaccine studies and monitoring of deaths from all causes are duly heeded.