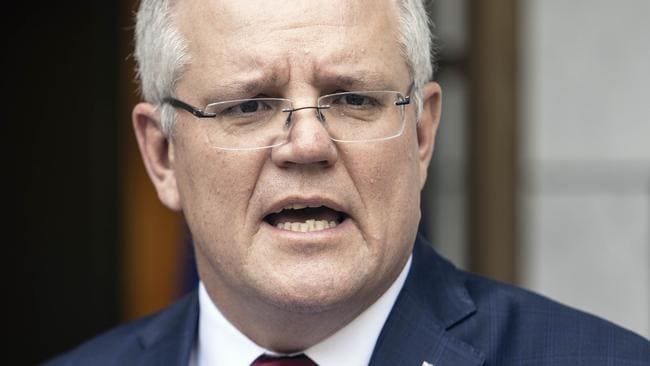 Prime Minister Scott Morrison says he expects a COVID-19 vaccine will be as “mandatory as you can possibly make it” for all Australians once it becomes available.

News.com.au revealed today that the Morrison Government has confirmed a landmark agreement with drug giant AstraZeneca to manufacture one of the world’s most promising coronavirus vaccines currently being developed by Oxford University researchers.

If it’s proved safe to use, Prime Minister Scott Morrison believes the agreement will ensure Australians will be among the first countries in the world to secure the jab, revealing this morning it could be available to Aussies as soon as early next year.

Asked whether the vaccine would be mandatory, Mr Morrison told 3AW’s Neil Mitchell that it needed to get to about 95 per cent of the population.

“I would expect it to be as mandatory as you can possibly make it,” the PM said.

“There are always exemptions for any vaccine on medical grounds but that should be the only basis.

“I mean we’re talking about a pandemic that has destroyed you know, the global economy and taken the lives of hundreds of thousands all around the world and over 450 Australians here.

“We need the most extensive and comprehensive response to this to get Australia back to normal.”

However, in response to suggestions there would be community resistance to mandating it, Mr Morrison said the government had not yet made a firm decision and this would be made once the medical issues about the vaccine were known.

Mr Morrison said there “we’ll take that issue when it presents when clinical trials are finished and we have to understand what the medical issues potentially might be and that’s why we’ll take advice on its application but … you know, I certainly open to that suggestion but that is not a position that the government has taken”.

Mitchell pointed out that there would be campaigns from the anti-vaxxers but the Prime Minister seemed unfazed.

“I’m used to that, I was the minister that established ‘no jab, no play’,” he said referring to a program that sees government benefits withheld from parents who do not vaccinate their children. “My view on this is pretty clear and not for turning.”

“Of course, the first will be a voluntary call for people and I’m sure there will be long queues – socially distanced, of course – for this vaccine,” Prof Kelly said.

He said there would be strong campaigns to encourage people “and we’ve had experience before of linking vaccination with other programs and all of those things will be looked at over time”.

While the ‘no jab, no play’ program is aimed at getting children vaccinated, the Prime Minister was asked what the government would do when they were adults.

“We’re going to take this one step at a time,” Mr Morrison said.

“I don’t think offering jelly beans is the way to do that as you do with kids but we’ll take those issues as they present and consider what steps are necessary at that time.”

He said the rollout of the program would also depend on clinical advice that would identify any vulnerabilities in communities.

“The obvious priority is around health workers and people like that,” he said.

The Prime Minister was asked how he would make any vaccine mandatory.

“This is like any vaccine and, as you know, I have a pretty strong view on vaccines, being the Social Services Minister that introduced ‘no jab, no play’,” he said.