A Texas woman in the Cloverleaf area of East Harris County accused a Texas Sheriff’s deputy of raping her while her three young children were in the apartment, according to the first video news report seen below. In the second news report, it is said the cop resigned.

The woman’s name was released because she wanted her story to be known. Her name is Lisa Rodriguez and she claimed that her three daughters were inside the apartment when the deputy showed up to question her about making harassing phone calls, insisted she go upstairs with him, raped her and left.

He hurt me,” Rodriguez said. “He took something from me without even asking. That’s what hurt the most and my children were in the same house I was.”

According to Friday’s KHOU 11report,accused of raping a woman in front of her children has resigned. 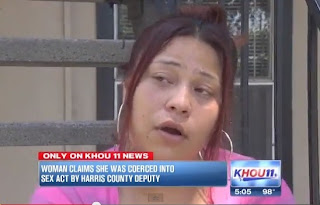