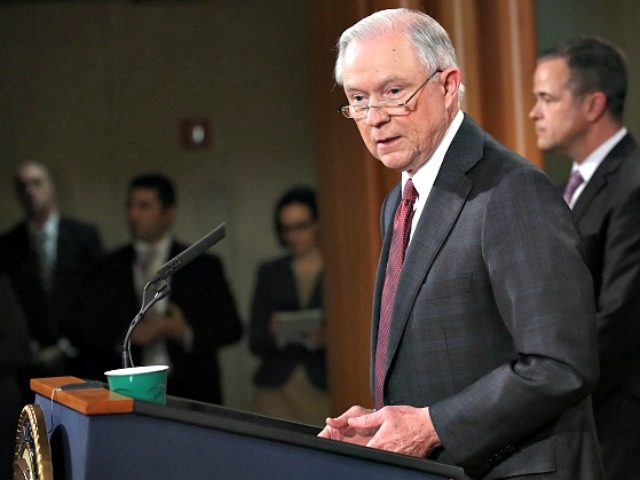 Attorney General Jeff Sessions told lawmakers in September he was recused from appointing a special counsel to look into the Uranium One deal.

Source: Congressman Says Jeff Sessions Has Recused Himself on the Uranium One Deal

Attorney General Jeff Sessions told a small group of lawmakers in late September he was recused from appointing a special counsel to look into potential corruption surrounding the Uranium One deal and Fusion GPS’s work on the Trump dossier, according to one of the lawmakers present.

Rep. Matt Gaetz (R-FL) told Breitbart News on Wednesday that he and other House Judiciary Committee Republicans had met with Sessions at the Justice Department on September 28 in advance of an upcoming committee hearing with Deputy Attorney General Rod Rosenstein later this month.

Gaetz said that when he asked Sessions to appoint a special counsel to investigate the 2010 Uranium One deal and Fusion GPS, the attorney general stood up, said he could not discuss the matter because he had recused himself, and walked out of the room, leaving them with a group of Rosenstein staffers “who showed no interest.”

“He said that anything that had to do with 2016 election, or Russia, or the candidates in the 2016 election, fell under the scope of his recusal, and he left the room,” Gaetz said.

“It was Sessions’ position that his recusal on the Russia matter divorced him from any oversight on Uranium One and Fusion GPS. That’s troubling. Sessions’ recusal is a function of his involvement in the Trump campaign. In no world does that impact his judgment as it relates to Fusion GPS and Uranium One. But he views the recusal more broadly. That’s troubling because that puts Rosenstein in charge,” he said.