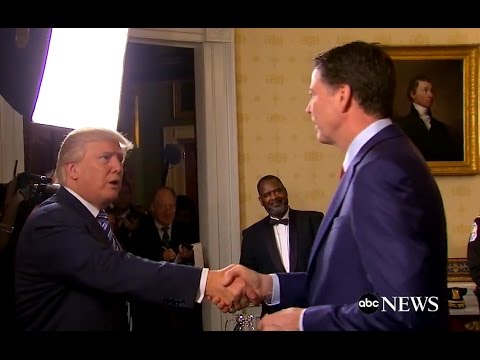 Comey “disgusted” when Trump hugged him – Tried to disappear in drapes.

Here’s the clip of the January 22nd ceremony. Wittes told the Times that Comey “was determined that there wasn’t going to be a hug,” although as you’ll see, Trump did his best to turn the handshake into one.

So he did not even want The president call his name in public. Ok he is not on the trump train, probably never was.

I think he knew The Clinton Machine would not past the finish line (who knows he was the FBI, it could have been from anyone / thing) so he released the Hillary Memo right before the election to hedge his standing as FBI director with Trump, or a sweet appointment etc.

Exit quotation from Wittes: “Comey was disgusted. He regarded the episode as a physical attempt to show closeness and warmth in a fashion calculated to compromise him before Democrats who already mistrusted him.”

Awwe the NYT, witty and decidedly wrong. Wittes of The NYT Seems to think that Comey was a Dem tried and true and that the opinions of fellow democrats meant more to Comey than to the USA and The Office  Administration they where serving.  As witty as he thinks he is people are still going to see the reason why Comey was not fit to longer serve the current US administration.  If he was not on the Clinton / Hillary no hit list he might well not have gotten this far Trump or no Trump and clearly Hillary would have shown him the door with in days.

Comey also reportedly thought ahead before his dinner at the White House with Trump a few days later. What do you do when you’re the only one in the room with the president and can’t hide in plain sight? You rehearse:

FBI Director James B. Comey prepared extensively for his discussions with President Trump, out of concern that the president was unlikely to respect the legal and ethical boundaries governing their respective roles, according to associates of the now-fired FBI chief…

Before going to the dinner, Comey practiced Trump’s likely questions and his answers with a small group of his most trusted confidants, the associates said, in part to ensure he did not give Trump any ammunition to use against him later.

The director did not take notes during the dinner with the president, but there were times, one associate recalled, when after meeting with Trump, Comey started writing notes as soon as he got into a car, “to make sure he could accurately record what was said.’’ HaTTiP

So as to Trump position on  this decision; Comey was not faithfully serving as one is expected as the Director of the FBI.  With level of contempt and disgust and partisan approval (or lack thereof)  it seem not so much  a scandal.