Posted on August 30, 2011 by The Extinction Protocol 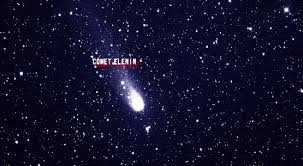 August 30, 2011 – SO MUCH FOR DOOMSDAY: Comet Elenin (C/2010 X1), widely known for inaccurate reports of its threat to Earth, appears to be breaking apart. Observations by amateur astronomer Michael Mattiazzo of Castlemaine, Australia show a rapid dimming and elongation of the comet’s nucleus akin to that of Comet LINEAR (C/1999 S4), which also disintegrated when it approached the Sun in 2000. Comets are fragile objects, so this development while unexpected comes as no surprise. Readers with pertinent images of Elenin are invited to submit them here. –Space Weather

I never believed this comet represented any kind of a threat to the planet and was quite frankly dismayed by the organized public campaign of fear-mongering on the internet and youtube about a potential doomsday event connected to this comet- most of it, as always, had absolutely no basis in science. –The Extinction Protocol