A CN Rail train carrying liquefied petroleum gas and crude oil has derailed and exploded about 80 kilometres west of Edmonton, prompting an evacuation in the tiny community of Gainford.

Parkland County Emergency Services says it received a call about the accident involving a westbound train around 1 a.m. MT Saturday. 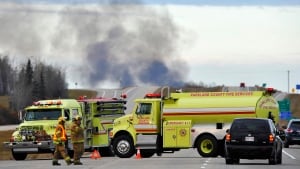 Firefighters block the highway near Gainford, Alta. as emergency crews battle a fire at the scene where 13 rail cars came off the tracks in an early-morning derailment. (Dan Riedlhuber/Reuters)

There was one “significant explosion” at the time of the derailment, followed by a “smaller one,” said Carson Mills, a spokesman for Parkland County.

One nearby resident told CBC’s Laura Osman she woke to her entire trailer shaking, and looked out her window to see the entire sky lit up by the flames. After witnessing a fireball burst in the sky, however, she said the explosion quickly died down and she returned to bed.

It wasn’t until 9 a.m. local time that officials arrived to tell her to leave her home. Others said they received notice to leave closer to 3 a.m.

Although Mills initially told CBC News that two of the cars containing liquefied petroleum gas were on fire, a later news release by Evansburg RCMP stated that three cars — all containing LPG — had caught fire.

Officials told CBC that one of the three burning cars later exploded, and that another is now compromised.

Fire officials say they have little choice but to let the fire burn itself out.

“Right now, the idea is to remediate the situation and try to contain the fire,” said Paquin, who said the risk to the local community has been minimized as much as possible.

“CN has deployed a team of emergency responders from our safety and environment risk management operations and other forces,” he said, adding that safety executives are also on site and have reached out to municipal leaders.

“We’re focusing on the issue at hand — which is the fire. There will be an investigation that is led by the TSB, to which CN will fully cooperate to try to and pin down exactly what happened.”

Mills said people have been told they’ll have to stay away from homes in the evacuation zone for at least 24 hours. It is unknown when the highway will re-open, but will likely not be until Monday.

It is still unknown when the tracks themselves will reopen, said Paquin.

“Certainly this could have been worse, given the recent incident in Lac-Mégantic — that certainly does illustrate the threats to residents living along rail tracks. So we’re thankful it wasn’t of that magnitude.”

However, Skaigec did not say whether there was still a concern that another explosion might happen. 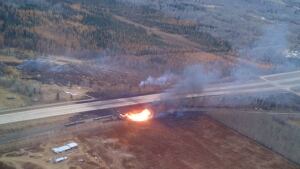 The area is under a state of emergency and the entire community of roughly 100 has been evacuated, in addition to all residences within about two kilometres of the derailment site.

Evacuees have been taken to the Entwistle Community Centre, about 20 kilometres from the derailment.

A spokesperson for the county said everyone has now been lined up with food, accommodations and other necessities, which are being paid for by the county and CN.

About 55 Evansburg RCMP officers and emergency personnel are on hand and are working with CN and the Transportation Safety Board of Canada to manage the situation. Fire crews from Parkland County and Yellowhead County, as well as a HAZMAT crew from Edmonton, are also on scene.

No injuries are reported and all CN employees have been accounted for.

While it is still unclear what kind of damage the derailment has caused, a spokesperson for Greenpeace Canada has already slammed Harper’s government, alleging it has put Canadians at risk.

“This kind of disaster will become the new normal unless the federal government takes much more effective measures to improve oil transportation safety,” said Mike Hudema, speaking for Greenpeace.

“The truth is that the Harper government has become such a cheerleader for the petroleum industry that it is failing in its duty to protect our communities and the environment.

“This is the third major derailment in Alberta in the last few months. How many more will it take before Ottawa implements transportation safety regulations that were recommended more than a decade ago?”
View Larger Map