2. (C) Reviewing the PM’s May 20 meeting with the President, FM Molyviatis reiterated to Ambassador May 25 the Greek argument that high Turkish sortie rates in the Aegean made it increasingly difficult for the Greek government to defend its cooperation with Turkey in other areas, including the EU.

Molyviatis emphasized that Turkey did not need to send 40 aircraft a day across the disputed airspace to make its political point; they could, he insisted, send one flight a week and accomplish the same purpose. If the Turks pursued a less inflammatory policy in the Aegean, he suggested, there would be much more sympathy for Turkey in Greece

3. (C) Ambassador questioned whether Greece drew a fine enough distinction between Turkish airspace violations and Turkish non-notifications of the FIR, reminding Molyviatis that the U.S. did not file FIR notifications either. It was important for Greece to be on solid ground when it reckoned up the number of “violations.” Molyviatis acknowledged that there was a legal difference between violations of the six-mile limit versus FIR notifications…. https://wikileaks.org 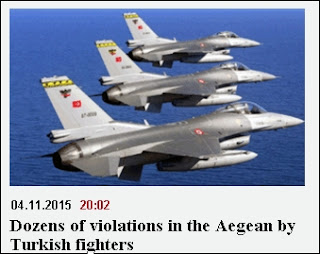 Again exceeded all bounds Turkish challenges, as today Wednesday, October 14 there were 31 violations of the national airspace, as well as virtual dogfight over the Aegean.

According to the General Staff, the Turkish aircraft were intercepted and identified, according to international rules, according to established practice…. https://translate.googleusercontent.com